Canada U20's 24-7 win over the United States has set up a winner-takes-all finale with England to decide the winner of this year's Tri-Nations. 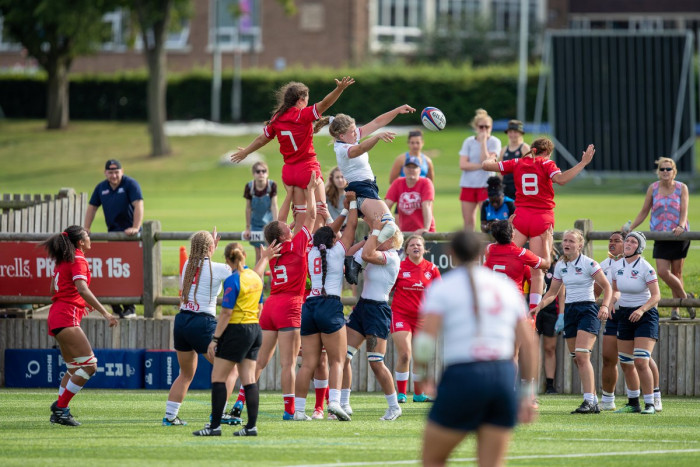 Two tries in each half allowed Canada to record a strong win over the United States in Loughborough today.

On one of the hottest days of the English summer, Brogan Mior scored from Canada's first foray into the USA end after just two minutes, an impressive team move leading to a try in the corner.

Canada looked the more organised of the two teams from early on. Solid defence allied to a powerful pack and fast runners meant that they were on top for most of the early exchanges. The first 20 minutes saw the USA under constant pressure, with only some over-excited handling errors preventing further scores. However eventtually a second score came, Angie Olukunmi completing another impressive period of play with the second try midway through the half (converted by Shoshanah Seumanutafa).

A water break (and tactical talking to) seemed to revive the Americans, however, and from the restart they quickly found themselves down on the Canadian 5m line. Only a forward pass prevented a score for scrumhalf Mary Jane Pasioles, and just after the half-hour a great darting run from Erica Jarrell appeared to have set up a try for Sophia Haley, only for the referee to rule it out.

But the Americans were now playing with much more confidence, and minutes later Allison Koenig broke through the Canadian line, supported by Morgan Freeman who took the ball on before passing back to Koenig to touchdown under the posts. Darina Roe added the extras and the USA were back in the game at 12-7, which remained the score at the break.

As the second half began Canada were again on top with a number of scoring chances in the first 15 minutesm again with just handling letting them down a key moments, but after 58 minutes it all came together with some impressive team work and quick passing putting Lizzie Gibson in for the third try, again converted. Canada lead 19-7.

Canada were forced back in their own line shortly afterwards, but some impressive defence through multiple phases kept the USA at bay. The drinks break seemed to work to Canada's advatage this time, and just after the hour Noemie Tremblay found herself with a huge overlap to record her team's fourth try. 24-7.

The USA continued to battle to the end, but the Canadian defence held out and with no further score ran out winners by 24-7.

After the game Canadian coach Jack Hanratty said that he was "pretty pleased with the win".  However "there is a lot we need to improve on and we have to be up for thar challenge".

Canada will now play England on Sunday. After England's 62-0 win over the same opposition last weekend, the game will decide the winner of this year's tournament.