Canada women's rugby head coach Johnathon Long has named an experienced squad to take on the USA women's side in a pair of tests in Lakeland, Florida on January 12 and 16th in the new Atlantic Cup competition. The tour will also feature Canada's U20 women taking on their US counterparts on the 16th. 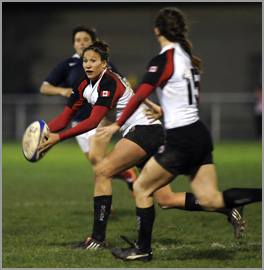 The tour will see both sides step up their 2010 World Cup preparations in earnest.

Long has named an experienced squad which includes players like Leslie Cripps, Gillian Florence, Heather Jaques, Arabah Chintoh, Sarah Ulmer and Mandy Marchak, all who will be looking to show some leadership against the USA who beat them the last time the sides met at the Nations Cup.

He has also named a host of newcomers including prop Tabitha Stavrou, fullback Andrea Burke and wing Brittany Waters who will all be hoping to impress in a World Cup season.

Long's US counterpart, Kathy Flores, is also keen to play Canada again after she saw her side take out a narrow win in August.

Having beaten Canada in the last minute of our match in the Nations Cup shows that both teams are well matched and we expect these two matches to be no different, Flores said.

We expect fierce competition, as Canada has just played the French twice and beat them in their first test. However, as with any rivalry, we are prepared to battle for the win.

In an interview with www.scrumqueens.com recently, USA captain Ashley English said she was relising the chance to get back on the field in 2010. See here for more.