Thirty-seven international women’s rugby players in Canada have issued an extraordinary statement accusing Rugby Canada of presiding over a culture of bullying and harassment. 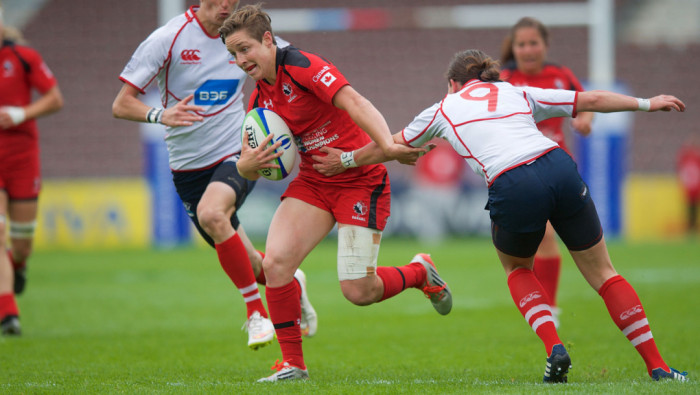 The players, which make up over half of those who have ever been involved in Canada’s centralised sevens programme, include long-serving stars Ghislaine Landry, Karen Paquin and Elissa Alarie,.

They had made an initial formal complained in January kickstarting an independent review of what was going in inside the sevens programme.

Former head coach John Tait resigned earlier this week when the review found that the though the conduct described in the complaint reflected the experiences of the athletes, it did not fall within the unions policy’s definition of harassment or bullying.

He said that despite the result, his position had been made untenable.

In a statement released Wednesday by captain Landry, the players said:

“The national team athletes have shown true courage in coming forward to shine a light on what they have experienced in an effort to bring about meaningful change to their sport,” the statement said.

“We followed the procedures outlined in Rugby Canada’s policy, which was put in place in 2013. We feel that this process failed to protect us and did not acknowledge the abuse and harassment that we believe we suffered.”

“Why now? There is an associated culture of fear and silence in sport when athletes experience physcological abuse, bullying and harassment.

“We need change and meaningful change begins with accountability at all levels.”

Rugby Canada CEO Allen Vansen said that the organisation will  undertake an independent assessment of the women’s sevens and other programmes .

This is due to start after the Summer Olympics and the outcome will be made public,

He added that Rugby Canada recognised that the "players are frustrated and dismayed with the conclusion of the investigation."

"There is an ongoing shift regarding what is considered to be appropriate behaviour in sport, and it is important that Rugby Canada keeps current with these changes.”

Tait issued a statement when the first review was concluded saying

“I was not surprised that the investigation, which I had requested to be initiated, concluded that the complaints were all unfounded and did not breach any of (Rugby Canada) policies,” he said. “Regardless, I no longer desire to continue as the national team head coach or in the role of high-performance director & have therefore decided to resign.”

Today he replied to Landry’s statement with the comment: “Gaslighting. The new policy would have found same as old one, complaints unfounded.

Tait led the Canadian women to a bronze medal at the 2016 Rio Olympics, gold at the 2015 Pan American Games and silver at the 2013 Rugby World Cup Sevens.