Canterbury and Counties march on in Farah Palmer

Canterbury and Counties Manukau lead the way in the Farah Palmer Cup after round two saw them beat Auckland and Manawatu respectively. The championship also opened with Northland making their debut 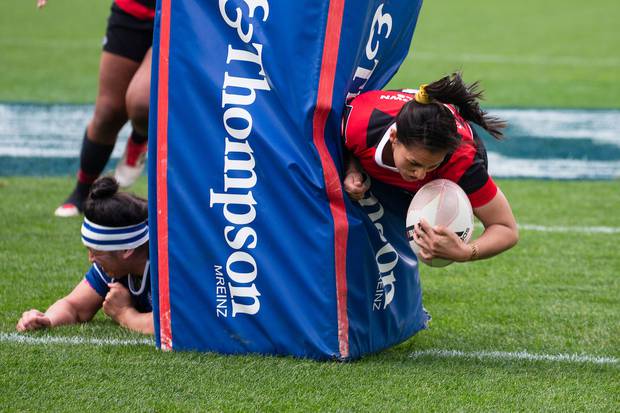 Last year's finalists have remained unbeaten in the Farah Palmer Cup Premiership last weekend. Canterbury, who have beaten Counties in the last two finals, took down Auckland 45-12 today, with the defending champions scoring seven tries to continue their strong start to the season, Canterbury wing Te Rauoriwa Gapper scored a double and walked away from a sickening head clash with a smile as the defending Farah Palmer Cup champions made it two big wins in as many weeks.

On Friday, Counties beat Manawatu 43-14, backing up their win over Bay of Plenty to be the only other Premiership side with an unbeaten record through two rounds.

Wellington recovered from their heavy loss in the first week to narrowly beat Bay of Plenty 32-29 in the Premiership section.

The Championship section kicked off.

North Harbour started their Championship campaign with a 22-10 win over Tasman, Otago beat Taranaki 57-5, while Northland's debut saw them lose 64-31 to Hawke's Bay.

After travelling down the day before from Kerikeri, Northland's first ever Farah Palmer Cup team charged out onto a cold and windy Park Island field in Napier with the support of many family members who had made the trip for the historic occasion.

Northland were the first to score through left wing Savannah Bodman, who would go on to notch up a hat-trick, but due to the visitors' fatigue and missed tackles Hawke's Bay stormed back into the game with a couple of soft tries late in the first half.

Leading 33-12 going into the second half, the home side struck again and the game threatened to blow out for the Northland women. However, the visitors hung in there to score tries late in the game to finish with 31 points and take pride in their first outing.

Bay of Plenty's Farah Palmer Cup team also suffered the same fate as their men's side, losing a tight game to Wellington, 32-29.

Volcanix coach Rodney Gibbs says his side conceded a couple of penalties in those final minutes, which allowed Wellington to score the winning try with four minutes remaining.

"You can see the hurt in the girls after the game. The girls looked good, they are trying really hard, and it is not the end of the world. We will have to go back to the drawing board and have a look at it. But talk can only go so far, we have to action a few things," Gibbs said.

Hawke's Bay had a 64-13 win over Northland. While Cortez Te Pou scored four tries for Hawke's Bay, Savannah Bodman touched down for three of Northland's five tries. It wasn't the result Northland's Farah Palmer Cup team were hoping for in their competition debut, but the signs for hope were evident

"It was basically just a welcome to FPC," Northland coach Cheryl Smith said. "It's the next step up but we scored 31 points and the Hawke's Bay coaches were quite surprised with the calibre of players we had, but overall, a lot of positives came from the game."

Northland made more history on Saturday as they performed the Ngāpuhi haka before the game. According to Smith, Northland was only the second team to perform a haka in the competition, alongside Waikato.

"It's part of the culture in Northland, Tai Tokerau and the girls are very into their culture and it's a way of bringing them together as well," she said.

Smith said the jersey presentation was an emotional and enjoyable time for the team and she was glad to hear her first five, experienced Black Fern and former Counties Manukau FPC player Victoria Subritzky-Nafatali, vocalise her pride in the team's performance.

Otago were nine tries to one winners over Taranaki in their 57-5 win in Dunedin.

North Harbour had a much closer tussle in beating Tasman 22-10.