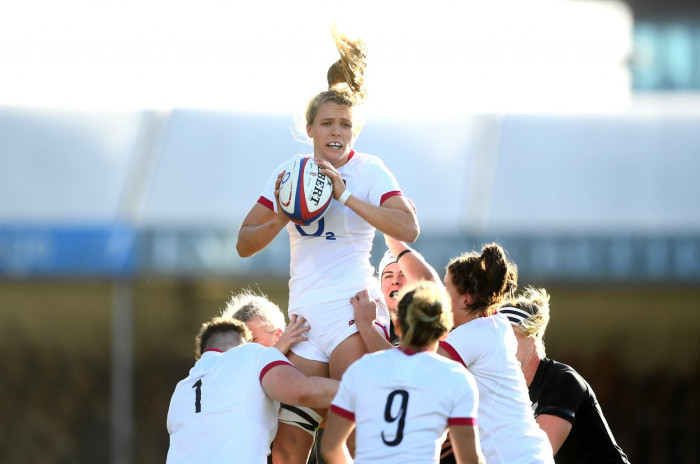 Zoe Aldcroft was thrilled to receive a surprise gift on her 25th birthday: England captaincy.

The Red Roses star was handed the honours for the first time to cap off a dream week, just days after she was nominated for World Rugby Women’s 15s Player of the Year alongside teammate Poppy Cleall.

Aldcroft will now lead out England as they take on the USA in Worcester on Sunday, looking to extend their unbeaten run to 18 Test wins and equal the men’s world record.

“The captaincy, Midds [head coach Simon Middleton] texted me about 20 minutes before selection was coming out asking me to come downstairs.

“And then he started ringing me and then I answered the phone and said ‘I’m not in at the moment’, so he told me on the phone.

“I actually swore a little bit, which I didn't mean to do! And then we just had a little chat and catch up when we got back just about how I should lead and that sort of stuff.”

Middleton had full faith his newly-named skipper wouldn’t just impress on Sunday, but could be a potential successor to Sarah Hunter.

"Zoe will be that, if Zoe continues to play like she has done then that will unquestionably be the situation.

"We wanted to help develop Zoe's leadership and expand that out a little bit because we do see her as certainly in that category of potential long-term captain for the Red Roses.

"The other thing is she's just massively respected in the team and across the coaching and management group, there isn't a player it was more highly respected."

Aldcroft was simply prepared to cheer for her teammate when the World Rugby Player of the Year nominees, announced Monday, were revealed internally.

She said: “I found out about the World Player nomination last weekend at shirt presentation.

“There were people getting their first caps and 50th caps and then ‘Oh, we've got some World Player of the Year nominations.’

“I was thinking oh it’ll definitely be Poppy and then I was one as well, I was like, oh my God!”

Aldcroft may also get to skipper Gloucester-Hartpury teammate Connie Powell, who has been named as one of two debutants on the bench alongside Lucy Packer.

Scarborough-born forward Aldcroft moves from no.4 to no.5 as Middleton makes 22 changes, five positional, to the team who beat Canada 51-12 last week at the Stoop.

Experienced players Abbie Ward, Poppy Cleall, Marlie Packer and Amy Cokayne have been released from camp with Middleton looking to test out his full squad as Rowena Burnfield is named in her first Red Roses team since February 2019.

Burnfield is in line for her 50th cap if she comes off the bench, with Lydia Thompson set for the same milestone when she runs out at winger on her home ground.

Middleton said: “I think the USA will bring a bit of unpredictability. I think any side coached by Rob [Cain] will have a little bit of that about them.

“I also think Rob will look at it and go if we go through the motions we won't beat England so we have to do something different, so we have to expect the unexpected.”