China are back in the World Series

China will return to the Women’s Sevens World Series next season after winning the qualifier in Hong Kong. 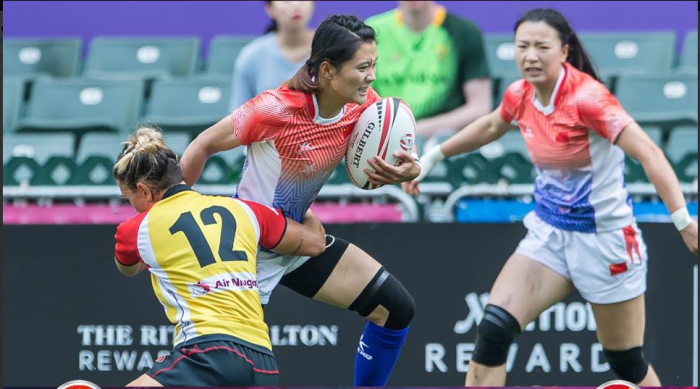 As well as being highly competitive, the World Series qualifier is also one of the cruellest of tournaments. The are no prizes for second place here. A glittering, perhaps sporting life-changing, prize awaits the winners, but for every other team as soon as they are out of the tournament they are on their way home – there are no classification games, no silver or bronze medals. This is winner takes all.

And it as China who were the winners. With six wins out of six, and the leading team after the pool phase, they swept to a 31-14 win over South Africa to qualify as a core team for the 2018/19 series.

The World Series qualifier was again hugely competitive. Only Mexico appeared seriously out-classed on the opening day that included some exciting battles, and shock results.

Perhaps the most notable was Kenya’s historic pool win over one of the top seeds, South Africa, by 24-12, to win Pool A and qualify for the quarter-finals as the second seed.

It was a much anticipated win, as the gap between South Africa and the rest of the African continent has been noticeably closing in recent years, but this the still first time a full-strength women’s Springbok team had lost to another African team – in 7s or 15s. Less than three years ago the South African Olympic Committee ruled that it was too easy for the South Africa to qualify for the Olympics via their continental championship – not any more it seems.

Belgium were another team to defy expectations. There had been suggestions that they had prepared well and could be strong outsiders, helped by being the only European team to have played in a Hong Kong qualifier before. What was a surprise was how they swept through Pool C conceding only one try, to Wales, one of the pre-tournament favourites.

The Welsh were a little inconsistent on the opening day, recording the biggest win of the opening day against Argentina, after struggling against Poland and before losing to Belgium.

The other pre-tournament favourites – China – won Pool B, as expected, but even they did not have it all their own way, opening with a narrow 14-7 win over Kazakhstan and tough 19-7 win against host Hong Kong before only really hitting their stride with a 31-5 win over Brazil. The hosts, Hong Kong, were the unlucky third ranked third placed team, missing a chance to play in the main stadium on the second day.

The other two games were far closer. Belgium defied expectations yet again to beat the far more experienced Brazilian team 17-12 to line up a last four battle with China, while Argentina pushed Kenya all the way in their game, only losing also 17-12.

In the semi-finals, China ended the memorable Belgian run with a 22-5 win, which left Kenya having to repeat their first-day heroics against the ‘boks – which they nearly did, tying 7-7 after regulation time before South Africa won in sudden death extra time.

Yet for all of the teams the need to find a competitive structure grows all the more urgent if they can have any hope to stay in contention with the top 10 teams in the World Series. China return to the World Series, after three years in the wilderness, having been relegated after their only previous year as a core team in 2014/15. They seem a far stronger team than in the last appearance, but the tournament as a whole has moved on and simply retaining their place will be the priority.

Unfortunately the chances of them doing so do not look good. Qualifiers from last year – Japan – have been Asia’s leading nation for some years so, but they struggling to hold onto their place. It cannot do the game any good if every promoted team is immediately relegated again.

But for now, China can celebrate – and start to plan.