China are Asia U20 champions again, winning the title without conceding a point. 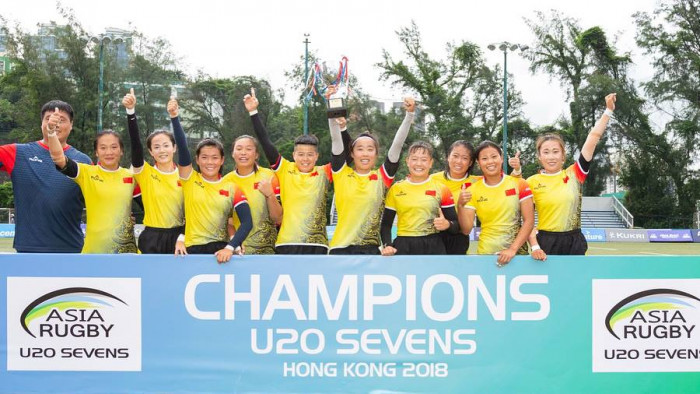 This years's Asia U20s, again held on Hong Kong (10-11 August) had a smaller field than in 2017. Japan again did not take part, and India - who sensationally reached the semi-finals last year - were also no-shows.

From the beginning it was clear that there were only two teams likley to reach the final. Hosts Hong Kong’s swept all comers to top their pools on the opening day of the 2018 Asia Rugby U20 Sevens tournament at Kings Park, beating Singapore, 29-7, before beating last year’s runners-up Thailand 20-5. Jessica Eden notched two tries to lead Hong Kong’s five-try win over Singapore, with Hebe Talas, Beatrice Bourron and Shirley Lam adding tries.Eden and Bourron were back on the scoreboard with tries against Thailand, (finishing as the day’s top scorers with three and two tries respectively), as were Chloe Chan and Maelle Picut as Hong Kong extended a 5-0 lead into a 20-5 win in the second half.

Coach Sam Feausi was delighted with her side’s showing, particularly in their improvement game-by-game. “We had a slow start against Singapore, but we worked our way out of that to win. Then we came out and won a very tough game against Thailand, who have been a challenge for us at this level. The girls played with a lot of heart and to get that win is, for us, a huge achievement and one that I think will add to the sense of self-belief that is building in the squad now”.

However, opening day optimism was only due to the fact that Hong Kong had yet to meet China, who had dispatched Malaysia 40-0 and Thailand 14-0 on day one and on the second day Hong Kong ran into reality and the China steamroller twice en route to what was remarkably their first ever appearance in an Asia Rugby U20s Sevens final.

In their final pool match against China in Hong Kong were lacklustre, going down 28-0, before bouncing back to beat Malaysia 15-0 to set the stage for a rematch with China in the Cup final.

With the partisan crowd firmly behind them, Hong Kong dominated China for the opening five minutes of play but missed out on three opportunities to score as they were camped out on the Chinese try-line for long stretches of the first half. But Hong Kong were unable to keep China penned in their half forever and eventually the defending champions broke away for an 80-metre try against the run of play as the half-time buzzer sounded.

That try proved demoralising for Hong Kong, as did China’s early score to open the second half. Soon Hong Kong heads had dropped as China found cruise control to add four more tries and run out 33-0 winners.  Hong Kong’s result moves them up a spot into second place on the Asian rankings and coach Sam Feausi was delighted with her side’s accomplishments.

“I’m proud of the team. It was a huge achievement for us to reach a cup final for the first time at this level. That was one of our objectives for the tournament, as was beating China, so we had didn’t achieve everything we wanted but the girls now have a taste of what is required at this level. There is a lot of potential in this squad with seven or eight of the girls eligible to play next year, so we have 12 months to work on closing that gap with China.

“It is up to the girls to keep putting the work in, but they have had some great examples from our departing senior players like Grace Hood and Chloe Chan, who have been giving up their summers every year for the last three years to come back and play with us,” she added.