China are the Asian 7s champion for the first time since 2014 after a near perfect performance in Al Ain, UAE. 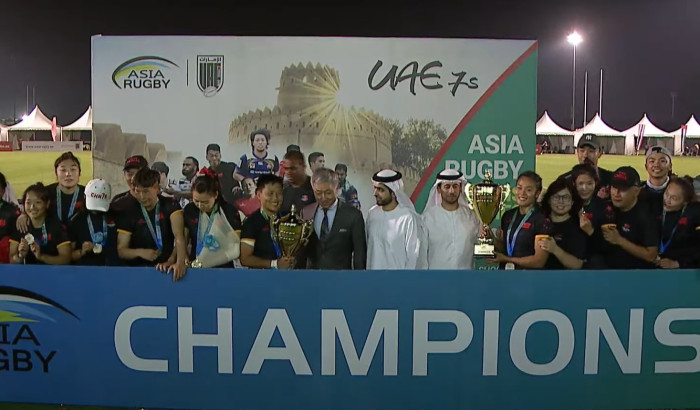 The third and final round of the Asian 7s took place in the UAE, with the overall title to be decided after Japan and China had each won one of the previous rounds.

With Sri Lanka again absent, only seven teams took part – China’s Pool B being limited to three teams. China won this with ease, brushing aside Philippines and Thailand without conceding a point The win against the Thais was a particularly impressively 26-0 against the team that had finished third in the previous two tournaments, and would go onto finish third here.

Japan won Pool A but both Hong Kong and Kazakhstan found a way though their defence, and their fragility was shown up in a semi-final against Thailand where the Thais gave them something of a scare, Japan only taking it by 19-14.

Hong Kong made the last four on points difference after a 12-12 draw with Kazakhstan in their opening pool game, but were brushed aside 31-0 by China.

China’s faultless defence was carried into the final, as they led 14-0 at the break against Japan. The Japanese pulled a try back, then went down to six players for the final minutes after a Chinese break was only stopped with a high tackle.

From the resulting play China extended their lead to 21-7. Japan pulled the game back to 21-14 in the final minute – a slightly bizarre try after a quick pass hit a Japanese player in the face. The ball bounced forward and China hesitated, perhaps expecting a knock-on, only for Japan to grab their chance and score. But China took the resulting restart, and hung on for the final few seconds to win the game, the tournament and the title.