China have won the Asian U18 tournament in front of impressive crowds at Bhubaneswar in India. 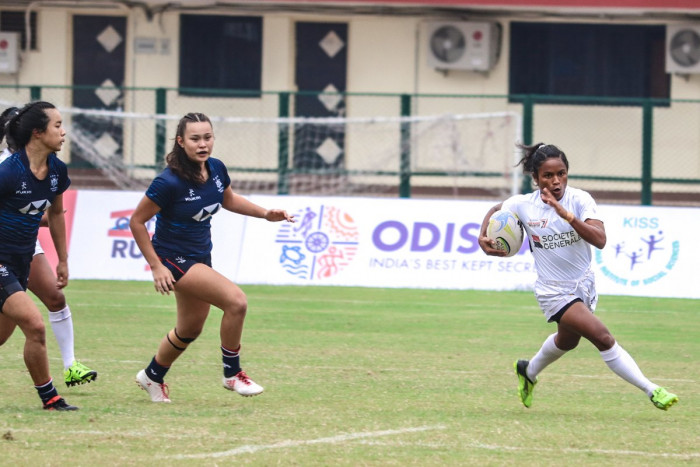 15-try Sweety Kumari - the hero of the home crowd.

After two years on the back pitches of the Dubai 7s, the Asian U18s took centre stage at Bhubaneswar, and was rewarded by impressive crowds, over 15,000 attending the three-day event.

The crowds were rewarded by an impressive performance by the home team, who began the second by setting a new women’s sevens world record, beating Bangladesh 89-0 – a 13-try win that had seen India 54-0 ahead at the break.

This was Bangladesh’s first international women’s sevens (U18 or senior), and it was a tough debut. Sri Lanka also scored 13 tries in their win on the first day, and the Bangladeshi team conceded 344 points over their six games.

China were runners-up in 2017, but with champions Japan not sending a team they were top seeds this year, and lived up to that seeing sweeping through Pool A with 177 points in three games, with none conceded.

The pool runners-up were a surprise. Qatar. taking part for the first time, beat both Laos and the Philippines to reach the quarter-finals.

Hong Kong – winners of the first U18 title in 2016 – won Pool C comfortably, only Thailand crossing their line.

The knockout stages were mostly one-sided affairs. The quarter-finals ended the second day, and ended in comfortably wins for the leading teams. India and China reaching the last four for the third time, beating Qatar and the Philippines, while Hong Kong and Thailand made up for their quarter-final defeats last year, beating the UAE and Sri Lanka.

China and Hong Kong both won the semi-finals comfortably, and China dominated the final, sweeping to a 28-0 lead before Hong Kong scored a consolation try in the final minute.

Qatar were rewarded with the Plate, and the bowl was decided as a round-robin pool, rather than a knockout, giving each team an extra game, with Laos the clear winner.

U18s is about spotting future talent, and the players that stood out in Bhubaneswar were India’s Sweety Kumari, who scored 15 tries in her six games, with China’s Weiyan Wang (14) and Hong Kong’s Florence Symonds (12) close behind. China’s Wenyan Zhang was the top points scorer, her nine tries and 16 conversions.