Clark: We are relishing clash with France 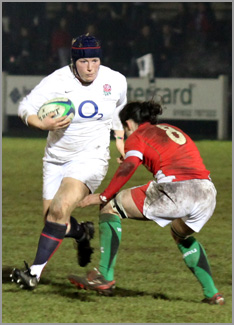 England women's rugby prop Rochelle Clark says she is relishing the trip to France on Friday night. The England stalwart, known to everyone as Rocky, has been a mainstay in the front row this 6 Nations and is in the team to play France this weekend for a shot at a fifth Grand Slam in six years.

It says a lot about Clark's stature in this talented England squad that when she made her comeback earlier this year after some time out injured, national coach Gary Street said he was welcoming back "one of the world's best props."

Clark had missed a chunk of the season with an injury - and most disappointingly for her, she missed the two games against New Zealand last November.

"I broke my arm a few weeks before the New Zealand tests and obviously I was devastated because I had to watch the games from the sidelines," she said.

Clark has been involved with England since 2005 and was in the team that lost to the Black Ferns in the 2006 World Cup final.

"Because of that I was very proud that we beat them in the last game in November because now we know we can beat the Kiwis and it has given us a lot of belief going into this World Cup."

The injury meant she was out of action till the start of the year but her impact in this 6 Nations has been telling with a couple of tries and some solid work around the park.

"I was ready to go back at the start of the year but we had all that snow so I had to bide my time though I was dying to get back out there. I made it through the first session though and was named on the bench for the first 6 Nations game which I was really pleased with. I came on and felt I made an impact, scored a try as well which was great. I was delighted that the coaches had the confidence to pick me after being out of the game for a while really."

This 6 Nations so far has been smooth for England - four wins a row with no major scares in any and the concession of just a solitary try means that England will go to France in fine form. Gary Street has opted to mix his team around in every game with less experienced players getting their chance to stake a claim.

"I think the team has found its feet and a lot of different people can now work off each other.I do agree with the squad changing all the time actually because Gary's got to find his best 26 players for the World Cup so mixing combinations around will help him get there."

A hammering over Scotland last weekend has set England up well for their Grand Slam finish but Clark says that games have been tougher than the results suggest.

"I think Ireland has been our toughest game so far, it was very forward oriented and so I had to earn my keep. As a front rower I have been pretty happy with the set pieces this year so far. I think the scrums have been pretty good and we have good unity up front. The lineout's been good though there are some areas we could improve on."

Looking ahead to Friday night where England will play at the largest club football ground in France - at the Stade Vellodrome - which is used regularly by the France mens national rugby team.

"I absolutely always relish playing in France. They usually get crowds of 5 or 6,000 even when you're playing in a small town and the atmosphere is always fantastic - it really gets the players buzzing. I think playing at night under the lights as well is always great. France in France are always a real force. We want to go there and win and take the title and the Grand Slam but you cannot predict how they will play because they've had a good season."

Next week will see the England players take a well earned break for a month, but Clark, a personal trainer, has a busy schedule between work and coaching. She coaches two men's side - a university team and an U17 team.

"It's tough but you enjoy it. This week has been hard because we've had such a short turnaround so I've been trying to fit a lot of work into the three days. I really enjoy coaching the guys as well. They're really supportive and they've come down to see me play at Esher for England this season - there's lots of banter but it's good fun."

Should England take home the Grand Slam this weekend - her time off will be even more enjoyable.