The classification matches were all played just as hard as any final. 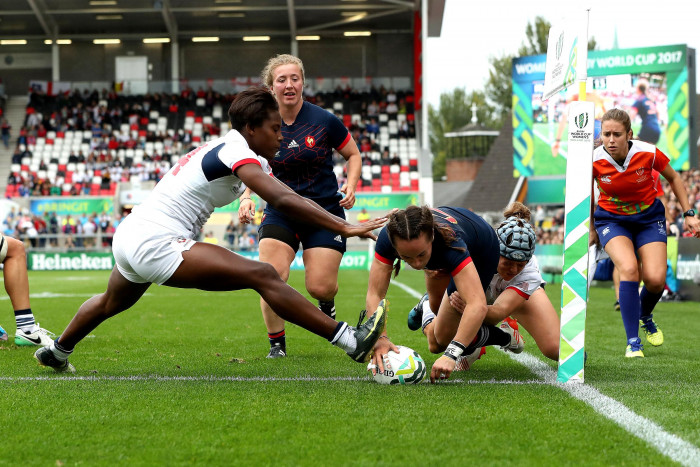 An amazing first half, played at incredible pace, produced so many great moments it was hard to keep up. Literally end-to-end stuff at the start, it took 15 minutes for the first points to appear on the board, with the USA eventually going for the posts with a penalty, Kelter converting with great confidence.

But that just signalled a great period of play for France. On 21 minutes a period of play where most of the French team were involved eventually ended with a try for Corson in the corner, her power driving her over.  Four minutes later Julie Annery slipped like an eel to the line – only to be knocked into touch on the flag. Shortly afterwards, after some great skills by Romane Menager, the ball found its way to the French forwards – and it was Mayans who found the space to increase the lead  to 12-3. The on 35 minutes captain Gaelle Mignot found a gap in the USA line to spring 23m to score a third French try.

But USA were not finished, Gustatis scoring a crucial try right on the halftime whistle, the half ending 19-10 to France.

There was little let up in the second half. Kelter narrowed the gap early on with a penalty, but that would be as close as the USA would get. Jade Le Pesq brilliantly avoided touch to extend the French lead after 51 minutes and – after Kelter had hit a third penalty – Julie Annery completed a great move initially set up by player of the match Corson. USA added one more score, Emba getting the score after some great footwork by Javalet, and a strong run right to the line by Kelter. 31-23 to France.

USA, with eight minutes left, turned down a possible fourth penalty chance for Kelter, and failed to make anything of the resulting line out. That effectively ended the game, though both teams carried on battling throughout the final 10 minutes to complete an enthralling encounter.

Wales finished 7th and with it, secured their place at the next World Cup, in a game that ended the hosts' campaign on a hugely disappointing note.

Ireland started with more ambition than we’ve seen throughout the competition, with Ali Miller seeing a huge amount of early ball, and she had the best chance in the opening ten minutes when Nora Stapleton’s cross field kick was allowed to bounce when a score seemed inevitable.

With Wales conceding a huge number of penalties, Ireland capitalised on 12 minutes when Paula Fitzpatrick crashed over for a try from a well organised driving lineout.

Wales hit back with a period of dominance, with Sioned Harries showing her power but despite numerous darts at the try line, the Welsh couldn't quite find their way through the solid Irish defence.

Robyn Wilkins got them on the board eventually with a penalty.  As Ireland’s discipline started to let them down, Wales went time and time again to the corner and finally a well organised line out helped Caryl Thomas to drive over with Wilkins adding the extras to make it 10-7 after half an hour, which is how it stayed till halftime.

Wales started the second half strongly and it looked like Amy Evans has scored after a couple of minutes but Amy Evans was just short.

The loss of Ailish Egan in the first half was telling at scrum-time and from 5 metres Wales demolished the Irish scrum and Sioned Harries dived over after some quick thinking.

Welsh skipper Carys Phillips put some daylight between them with a brilliant driving line out which she dived over.

There was life in Ireland and Lindsey Peat hit back with a try but when Shona Powell-Hughes returned the favour and pushed it out to 27-12 so that when Katie Fitzhenry crashed over out wide it hardly mattered as it was too little too late.

Spain utterly dominated possession and territory in the first half, but Italy would have been pleased to go in only 8-0 down – the only try coming when they were down to 14 after a yellow card for Rigoni for a deliberate knock-on.

Spain went through the phases – 20 from the kick-off – but rarely threatened the Italian line, At one point they did get inside the Italian 5m, but a great turnover from Arrighetti ended that threat.

Both sides had clearly been told to shut down key opposition players – Furlan for Italy and Echebarria for Spain – with neither getting very far on the few occasions they had any ball, though a great 20m run from Furlan set up on of Italy’s few attacking periods in the half. Overall Italy were let down by their handling, repeatedly losing the ball in the tackle so that their few forays into the Spanish half tended to break down before they became a threat.

Nonetheless at the break the match still could have gone either way.

And the second half was the mirror of the first. Suddenly it was Italy dominating possession, winning turnover, and threatening the line. It took them just three minutes to get on the board, Sillari spinning out of a tackle to score in the corner. A few minutes later Sillari was on target again, this time with the boot, slotting a 35m penalty to level the scores.

As the hour approached Italy went ahead, a great team move ending with Stefan scoring – and Sillari adding a well-hit conversion. Italy 15, Spain 8.

It looked like Italy had the game. With two minutes to go, Spain had already lost Rico and captain Gonzalez through injury, and the ball was on the Spanish line. But Spain turned over, the ball reached Echebarria who kicked ahead, gathered, and scored under the posts. Patricia Garcia add the conversion at it was 15-15, full time. And on to sudden death extra time.

Spain had the first opportunity. A long series of phases set up a drop goal chance for Patricia Garcia – and it just slipped wide. Italy now gained possession, worked forward into a great attacking position – but were then turned over. Spain looked like they had escaped – but Rigoni intercepted. She dashed for the line, was pulled down short, but the ball want wide through Stefan to Italian captain Sara Barattin… who scored in the corner.

The end of a second terrific game between these two teams, but it is Italy who take 9th place in the tournament.

Hong Kong had plenty of possession in the opening quarter, but never really threatened the Japanese line. Japan, on the other hand, had two chances – and took them both.  A turnover on Hong Kong’s own 22 resulted in the first try, from Maya Shimizu, in the second minute and then a great break by wing Tsutsumi outflanked the Hong Kong team 10 minutes later.

The opening half was played at great pace, with only a handful of penalties, and as it went on Japan gained more and more of the possession. Hong Kong worked hard to keep them out, but five minutes before the break their line was repeatedly stretched to the limit before Alari Kato finally found space around the side. 15-0.

The second half continued where the first half left off. Apart from one foray into the Japanese end – where Hong Kong switched to using their forwards to batter through for a try – the game entirely at the Hong Kong end. Though they had plenty of possession they could find no way through the Japan line, with almost every phase seeming to end slightly further back that it started. When Japan inevitably turned them over, the result was almost as inevitably another try – it might have taken a few minutes in some cases, but with Japan gaining ground with every phase ultimately the scoreboard continued to tick forwards.

Five more second half tries – and two conversions – and Japan finally had a World Cup win.