Reports on matches as they are played 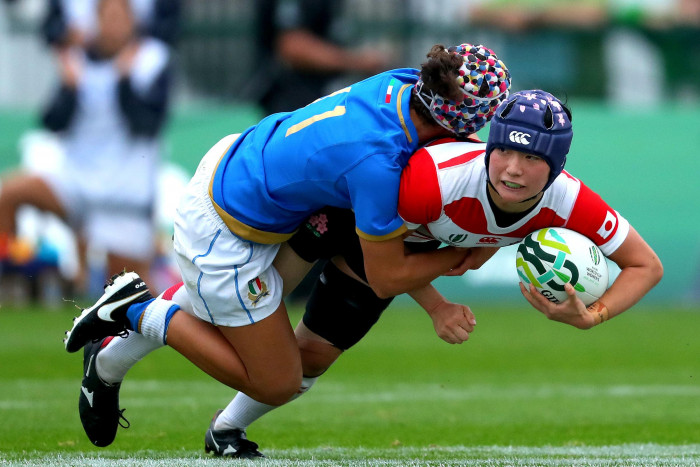 Australia demonstrated how their experience in this tournament is improving their play, as they reversed their pool loss to Ireland with a decisive and largely dominant win in this 5th place semi-final.

After an even start, a try for Sharni Williams opened the scoring with a try for Australia out wide. Ireland’s woes appeared to grow when captain Molloy was lost through a head injury only a minute later, but in practice this seemed to launch a period of strong Irish play.

Ailis Egan’s try pulled the scores level on 13 minutes,and four minutes later a great crossfield kick gave Alison Miller the pace she has been looking for all tournament – and Ireland were 12-5 ahead.

But gradually Australia began to pull the game around, and first Sarah Riordan and then Hilsha Samoa put Australia 19-12 ahead at the break.

Halftime did little to change the way the game was going, and after 49 minutes Millie Boyle extended the Australia lead still further to 24-12.

A two score game became a three score advantage to Australia when Hewson added a penalty nearing the hour mark, and when Murphy thundered over for a fifth Australian try with 15 minutes to go it was game over for Ireland.

A change of front row gave Ireland a new lease of life in the final minutes, but it was too late. Spence pulled a try back, and Fitzpatrick ended the game with a fourth Irish score – but Australia had proved to be far the better side.

Canada dominated the opening quarter, with Wales barely getting hands on the ball, never mind getting out of their half. Yet they only scored once through, Elissa Alarie. So when Wales finally broke out after 20 minutes it appeared they had survived and might be able to turn the game their way.

For five or six minutes the game hung in the balance, but it was Canada who broke the deadlock. After an Olivia DeMerchant try was ruleld out for an earlier knockout, Canada hammered the Welsh scrum, forced an error, and Brianna Miller was there for the score. With two more scores before halftime, Canada were in full command at 26-0.

A charged down kick from Snowsill extended the Canadian lead early in the second half to 33-0, after which is was all Canada, with Miller, Mervin and a penalty try following. The final score of 52-0 would have been more but for tries disallowed for knock-ons only spotted on video.

Two very contrasting teams opened play at Queens University. Italy were bigger and taller, with lots of international rugby experience but from the start showed a fragility in basic areas, such as ball retention. Japan, despite their size, dominated possession with excellent skills, but lack the experience to try something inventive sufficient to get through the Italian line.

In the opening minutes in particular Italy seemed to lose every breakdown, but Japan could not take advantage. Just keeping the ball and hitting the line is probably enough in Asian rugby for them to start the scoreboard humming, but here 10, 15, 20 phases would find them exactly where they began.

Italy’s few breaks gained yards every time, and in the few periods where they had possession they always looked most likely to score.

But it too a moment of brilliance from Sofia Stefan to finally break the deadlock. A great handoff and touchline run won Italy a penalty, and from the following line out (and area Italy dominated with their huge height advantage) hammered away at the line. Cucchiella was inches short, but Bettoni finally found the gap. 5-0 to Italy at halftime.

The second half continued in much the same vein, with Italy’s greater experience allowing them to seize chances. The first came soon after the break with Sillari making a great break down the touchline to double the lead, before midway through the half Sillari again achieved a turnover, Italy swept forward, Cioffi was just pulled down short, before Sillari – inevitably – was there to pick up the loose ball, 15-0.

As the game entered the final quarter, Japan noticeably tired, giving Italy more space especially at the breakdown, allowing them to keep the pressure on their Asian opponents. A fourth try, this time Stefan breaking away, ended the scoring just before time.

This was a game with a final score that did not reflect how well Hong Kong played, and above all how much possession they had. They had by far most of the ball in the first half, yet went in 14-7 behind.

Angela Del Pan put Spain ahead after only five minutes, but it failed to open any sort of floodgates. Hong Kong battered on the Spanish defence for the next 20 minutes, but could find no way through. It was therefore largely against the run of play when Isabel Rico added a second Spanish score on 26 minutes.

The pressure finally brought a reward for Hong Kong on 34 minutes when Rose Hopewell-Fong scored under the posts, but at halftime Spain were still 14-7 ahead.

The second half continued in the same way. Spain absorbing the Hong Kong attacks – even when down to 14 players after a yellow card for Redondo. Even refreshed players from the bench could not find a way through as Hong Kong went through phase after phase, but failed to make any progress.

As the game neared its final quarter Spain began to take advantage of a tiring Hong Kong. First Erbina and then Iera Echebarria, showing her speed and sevens skills, extended the Spanish lead on 56 minutes to on the hour.

The game was now all with Spain, but two tries were lost when balls went forward over the line, before Carlotta Meliz scored the final try in the 79th minute.

There was time for one more play – but neither team seemed to want the game to end, with both sides wanting to add another score, That final play lasted nearly ten minutes before finally Patricia Garcia kicked the ball out to end the game,