Poppy Cleall says she will lead from the front as she is set to make her captaincy debut for England when they take on New Zealand in Northampton on Sunday. 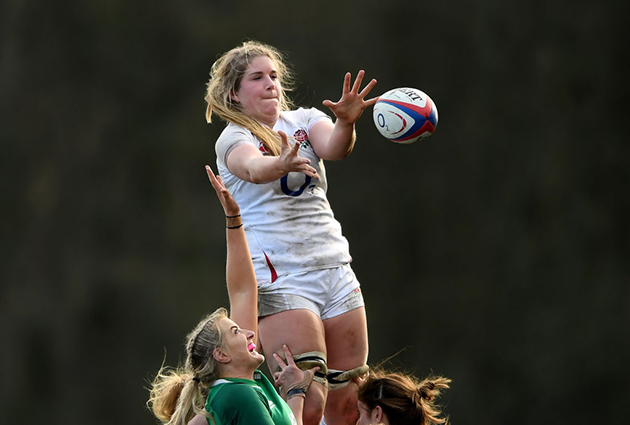 Cleall has moved to No.8 for the showdown against the Black Ferns, with regular captain Sarah Hunter on the bench as head coach Simon Middleton looks to give his pack leadership experience.

Hunter led the Red Roses to a record 43-12 victory over the world champions in Exeter last weekend and 29-year-old Cleall will look to inflict back-to-back defeats on New Zealand for the first time since 2012.

“I think for me, actions speak louder than words. I'm lucky enough that around me there's some incredible leaders that speak so well. Marlie Packer Abbie Ward, and still Sunter [Sarah Hunter] being the captain of England here with me as well,” she told Milly McEvoy.

“They speak so well, they can gee up any crowd and we're lucky enough to have them here, but for me it’s definitely going to be going out there, making sure that I'm the best version of myself to lead the team and concentrate on what I can do for the team and put us in the right places and go forward.

“Hopefully then as much as I have every person's back in the team, they also have my back, and we can put out an amazing performance at the weekend.”

Cleall was promoted to vice-captain last weekend after Amber Reed was forced to pull out with a hamstring injury which has kept her on the sidelines again and Leanne Infante (previously Riley) will step into the vice-captaincy role.

Also moving from the bench to the starting XI are front-row pair Amy Cokayne and Vickii Cornborough while Helena Rowland has replaced Lagi Tuima at 12, with Zoe Harrison keeping her position at 10 after a player-of-the-match performance last week.

Cleall added: “I had my sights and dreams set on just playing for England, that was a huge moment in my career to get my first cap, so now this weekend to be running out and leading my country, it’s a huge honour.

“I'm going have to tell the girls what an honour it is because I'm not sure they quite realize how special is to lead a team of incredible rugby players and people.

“I'm hugely proud and I'm just hoping to enjoy this weekend and then probably reflect and pinch myself afterwards.”

After subjecting New Zealand to their biggest-ever defeat in their 100th Test last Sunday, Middleton is expecting a ‘Blacklash’ from the Black Ferns.

He said: “It goes without saying there is going to be a reaction this weekend, but you can deal with things if you are aware of them, and I think that's one of the most obvious things that will happen.

“That's what we want because the bigger the challenge, the better we will be. We've gone about our processes this week, as we always do.

“We’ve had another week together as a side developing, a really good week’s preparation, so we will meet fire with fire and a little bit more and then make sure that we go through our technical and tactical things well, that will be our focus.”