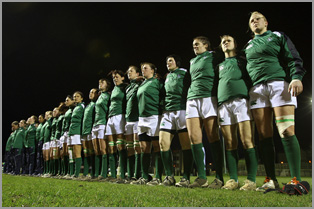 Ireland prevailed in this exciting and tough pool B clash on day two of the Women's Rugby World Cup where they secured a 4-try bonus point in a well earned victory.

This was always going to be a key game in this pool and with Ireland having lost their opener against England, a win was very much needed to keep any hopes of a semi-final spot alive.

Despite being played at the same time as the New Zealand V Australia game, the match drew a great crowd on pitch two with good support for both sides.

Ireland made the better start with an early run from fullback Niamh Briggs helping to set up a good position in the USA's 22 but a solid counter-ruck meant the Americans could clear under pressure.

The Irish though had the early momentum and Joy Neville's try came after just 6 minutes as she pounced to crash over on the same day she was wining her 50th cap. The swirly wind made the convert difficult and Briggs's effort just stopped short.

The wind was also making life hard at the lineout with both sides struggling to get the ball in straight. America were having no problems at the scrum though where they were dominant and it was one such position that led to their first score after a super scrum set up Jamie Burke to crash over under the posts.

Flyhalf Christy Ringgenberg knocked over the convert for a 7-5 lead.

The USA were showing their power up front with Ireland under pressure but both sides showed good attacking instincts in an exciting first half. A superb 50 metre dash from Briggs was a particular highlight for Ireland who looked very threatening in broken play. For the USA number 8 Blair Groefsema caught the eye with her tenacity.

It was Briggs who brought Ireland back into the game before half time, with a fine try after a good Irish lineout secured possession and Gillian Bourke hit the ball up releasing Briggs who outpaced US skipper Ashley English to touch down for a 10-5 lead at the break.

Ireland came out with the strong wind at their backs and they played smart rugby in the opening 10 minutes, using the breeze to get themselves into good positions in the USA 22. A series of lineouts were rewarded when they scored again with a excellent crash over from Neville again for her second of the day reland now led 15-7 but the USA were still well in the match.

Despite the game being tight, Ireland did superbly to secure the bonus point mid-way through the half. Tania Rosser reacted quickly to a penalty inside the USA 22 and her pace took her to the line. Briggs kicked her fist convertion of the day and suddenly Ireland led 22-7 and had wrapped up maximum points with over 20 minutes to go.

There was plenty of fight left in this USA side whose physicality up front continued to work Ireland's forwards hard but Ireland were tactically very sound, rarely getting involved in any squirmishes up front and moving play downfield using the strong wind as much as they could.

Phaidra Knight made a big impact for the USA when she came on at flanker and her side's efforts were rewarded with a try from winger Vanessa McGee whose pace took her around Nora Stapleton to take the score to 22-12.

That set up an exciting finish to the game as the USA threw everything at Ireland but the girls in green managed to hold out and take what was a much needed victory.