Former Ireland captain Fiona Coghlan, who will be commentating on Irish games on RTE in the upcoming Six Nations, gives her view on the Championship. 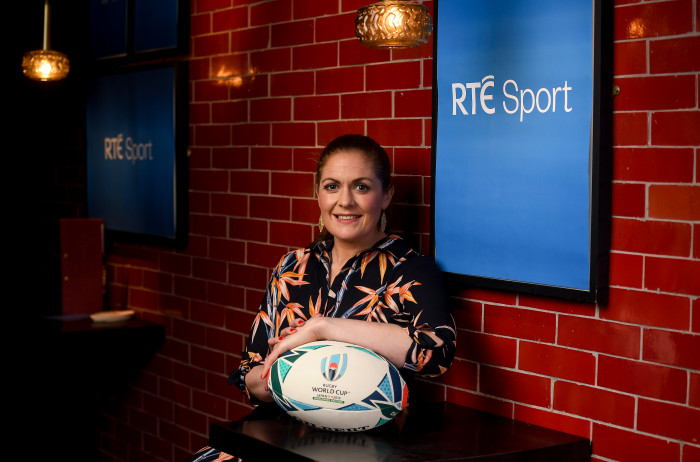 What's your view on the format this year?
I'm not a fan of reducing the amount of international games. However, due to the current Covid environment I am just delighted to see games taking place.  It was also reduced to allow for World Cup European qualifiers to take place and when they were postponed I thought there was an opportunity to relook at the competition and revert to normal.  There possibly wasn’t enough time to do this and due to the changing nature of Covid restrictions and  probably it was just best to get the games fixed and played. It will be interesting to see if the women’s game get more media attention and eyes on the games in this new window.  That could be a big positive to come from this.

How do you think Ireland are going to fare in their pool?
Going away to Wales is always a difficult task. Two years ago Ireland were completely outplayed by Wales but I think this group of Irish players are more cohesive and have grown as a squad so I would hope they would be able to turn that result around. Sophie Spence, the Wales’ intern coach might have something to say about that and she will know a number of these Irish girls and their strengths and weaknesses.  France on paper are a better team than Ireland and have produced better performances, but last year again they showed their inconsistency with the draw against a determined Scottish side.  I expect Ireland to finish second in the pool.

What's important for them in terms of progress and what would success look like?
A successful tournament would see Ireland finish in third place.  Coupled with that they will want consistency in performances while we see the continued development of players.

Who would you pick out as key players?
Claire Molloy is world class and it’s her consistency of top level performances over the years that sets her apart.  Ireland need the likes of Cliodhna Maloney to continue in her good form and then Beibhinn Parsons is so exciting and Ireland need to play in such a style to get her involved as much as possible.  It is imperative that Ireland nail down their out-half position - there has been too much trialling in that position since Adam Griggs took over.  Will Hannah Tyrell continue there after her first game there v Italy last season? It will be interesting to watch  it play out and settle.

How much of an impact do you think lack of game time is going to have?
Every National team is in the same situation, however the English Premier 15s has allowed a number of players to get consistently high level games which will hopefully benefit Ireland also.  Credit is due to to the IRFU for ensuring that the women’s squad have had ample training time together and they put in place very strict Covid policies and procedures to enable training to take place.  While the Irish players have had internal games, it isn’t the same level so we'll have to see if the bye in Week 1 will benefit Ireland as they will be able to analyse Wales or whether they be even more risty themselves by the second week.

There are a number of 7s players in this squad - do you think that hybrid model will suit Ireland?
It will suit Ireland for this competition as they 7s players have been in training consistently as XVs players since November.  Previously it hasn’t, as 7s players would only be in for a handful of training sessions before playing.  There is no doubting their ability to transfer to change between the two, they just haven’t played enough XVs games at any level to allow a smooth transition.  Going forward when the World Series and other sevens competitions start again and you look at the WXV, I can’t see this hybrid model working.

Are England the team to beat?
England are very consistent in their performances and results but France are hot on their heels.  The game last November in Twickenham was a cracking game of rugby and I’m looking forward to seeing them play, if not in the Six Nations but the following weekend where they have organised a friendly. In tight and pressurised games, I think England will feel the loss of Katy Daly McLean and need the likes of Rowland, Harrison or Jones to stake a claim for the jersey.  An area that I think England need to improve on over the coming year will be their scrum, they have some fantastic young props that can really play ball but they have to secure the set-piece.

RTE are covering the games once again - how important do you think free to air TV is for women's rugby?
RTE have shown all the Women’s Six Nations games since 2015 and are champions of the women’s game. The visibility and exposure piece around any sport male or female is vital and it is even more pronounced as you try to develop and grow the game in every facet from player or administrator numbers to getting more sponsors onboard and free to air just makes it more accessible to people.

What's your take on World Rugby's XV news and how much impact will that have on Ireland?
It’s new, it’s exciting and it will allow for more International games.  Like anything new, there will be teething problems such as qualification for each Tier and not having promotion relegation for the first cycle but I think it can be a game changer for the qomen’s game.  It will bring added competition and pressure to the Six Nations as teams fight it out for the Top 3 position.  It will be interesting to see where the game can go.  Amateur players will need more time off work to compete in this competition so I wonder is this the point where we see a change in the status of Irish Women’s players to semi-Professional or even professional?

What's your view on the development of women's rugby at grassroots in Ireland and what needs to help take it to the next level?
It has been encouraging to see the development at underage level with more clubs offering rugby to young girls.  Some clubs are establishing pathways from minis to youths and then onto a Women’s team.  Rugby in schools needs to built on as there is no formal competition structures there. There has been an recognition from the IRFU that the standard of the All Ireland League needs to improve and they are resourcing that and looking for clubs to sign up to minimum operating standards which is encouraging, and we were to see two new clubs in the AIL this season but unfortunately that didn’t go ahead.  I still question whether Ireland's Interprovincial games serve their purpose and ask whether they are a step up from club for all players. There has been much discussion around U20s team and whether we have the player base to field a team, I think it is something that we need to strive for, that we build that player base that we need the U20s