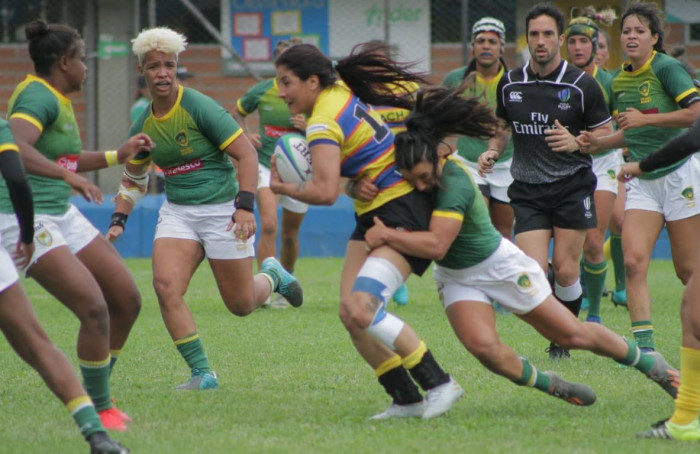 Colombia were thoroughly tested by Brazil in the World Cup Eliminator on Saturday (7th March). In a game that was much closer than the match-up between the same two teams last August, Colombia came from behind to open an 13 point lead just beforehalf-time, but never looked like running away with the game and had to survive incredible Brazilian pressure in the final minutes as the visitors tried to steal the game.

Brazil shocked Colombia after just five minutes when a try from Mariana Nicolau, superbly converted by Raquel Kochhann, put the visitors 7-0 ahead. But Colombia pulled a try back through   Leidy Soto four minutes later and finally went ahead on 20 minutes through Camila Cardona.

Colombia were now firmly on top, and a penalty from Misi Arzuaga followed by a Valentina Tapia try gave Colombia a 20-7 lead as half-time approached.

But Brazil were far from finished, and a well taken try from Thalia “Mulan” Costa pulled them back to within eight points at the break.

The second half was much more even. Colombia took an opportunity to extend their lead with a penalty early in the half, but soon Brazil were back of terms with sevens star Isadora “Izzy” Cerullo showing her speed to score her team’s third try, running round under the posts. Colombia still lead, but by only 23-19 with nearly 20 minutes still to go.

Tension was ramped up as time ran out, with Colombia defending their lead. The last minutes saw Brazil camped on the Colombian line. At one point they seem to have a 3:1 overlap, but great Colombian cover tackling closed the door. Finally Colombia achieved a turnover, kicked the ball out, and booked their flight to Nairobi for the next round.