Colombia have won a place in the final qualification tournament for the World Cup with a thrilling 16-15 win against Kenya in Nairobi. 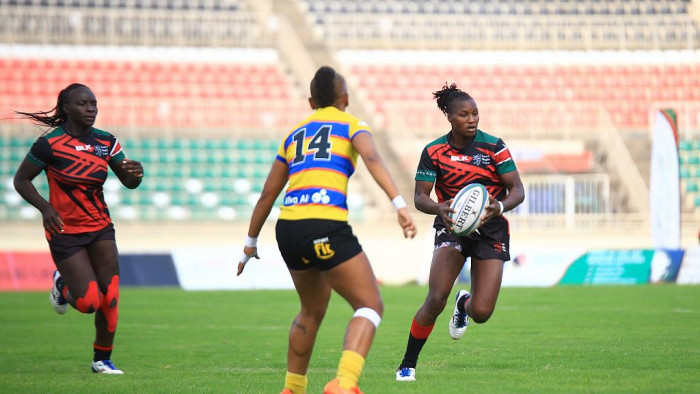 On a bright, sunny day teams from Africa and South America met in a test match for the first time. Kenya began five places higher in the rankings, but this was only Colombia’s third test and it was two decades since a South American team had played outside their continent, such things counted for little. This was a game that would be impossible to call and was expected to be close, and so it proved to be.

Kenya dominated possession in the opening minutes, but Colombia absorbed the pressure well. Kenya’s tactic of trying to advance the ball through a series of rucks had been evident from their previous games, and the visitors seemed well prepared for it. When Colombia finally got their hands on the ball they were much quicker to move the ball wide and especially in the first half always seemed the greater threat.

After both teams had missed their first penalty attempts at goal, Maria Arzuaga made no mistake from in front of the posts to put Colombia 3-0 up in the 18th minute of their first international match since March 2020 and first away from home.

She then kicked another shortly after Kenya captain Juliet Nyambura had been sent to the sin-bin as a result of persistent team offences.

The misfiring Kenyans conceded a further five points while their first-choice loose-head prop was off the field, and it was Arzuaga who again got her name on the scoresheet, the left winger crossing in the corner after good hands from tight-head Alejandra Betancur and fly-half Camila Lopera.

Lopera was unable to land the difficult conversion and the score stayed at 11-0 to the visitors until, at last, Kenya managed to keep their heads, and the ball, in attack.

Enid Ouma and Bernadette Olesia were stopped inches short but Colombia were powerless to prevent fellow forward, number eight Leah Wambui, from crashing over on the stroke of half-time. Grace Adhiambo Okulu converted to reduce the gap to just four points at the break.

The second half opened with Kenya at last starting to use their Olympic sevens players more.  Sinaida Aura Omondi in particular was seeing more of the ball, Kenya started to make inroads in the Colombian defence. A dangerous run from the winger ended with her inside pass being deliberately knocked forward by Leidy Soto. Okulu’s kick from the resulting penalty hit the far upright but still went over.

Kenya continued to up the tempo, and after a strong run out of defence by Wambui, the Lionesses forced a penalty inside the Colombian half. It was quickly taken and Janet Okello used her strength and pace to join fellow Tokyo 2020 Olympian Wambui on the scoresheet.

A high tackle from Wambui in the 55th minute, deemed worthy of a yellow card, checked Kenya’s momentum. And worse was to come five minutes later when Zimbabwean referee Precious Pazani reached into her pocket again and dispatched flanker Michelle Akinyi to the sidelines for 10 minutes.

The 13 players of Kenya were under intolerable pressure, and from a dominant scrum five metres out, Colombia scrum-half Andrea Ramirez launched a blindside move which was finished off by Arzuaga, to put Las Tucanes ahead by the narrowest of margins.

With a couple of minutes remaining, Kenya had an opportunity to kick for goal when awarded a penalty just over 35 metres out, but they chose to tap it instead and the move came to nothing when they went off their feet at the resulting breakdown.

To their delight, Colombia managed to see the game out and can now look forward to competing against Samoa and two other teams – one from Asia and one from Europe – for the last ticket to Rugby World Cup 2021 in New Zealand. The date and venue for the Final Qualification Tournament has yet to be confirmed.

One thing that will be confirmed on Monday is a new record high of 26th place for Colombia in the World Rugby Women’s Rankings.

Las Tucanes will also be the higher-ranked of the two teams, with Kenya dropping three places to 28th (and fourth in Africa) as a result of their sixth consecutive defeat.