Spain completed their three-match South African tour with a 29-12 test-match win against the Springboks, giving them a 100% record to take home 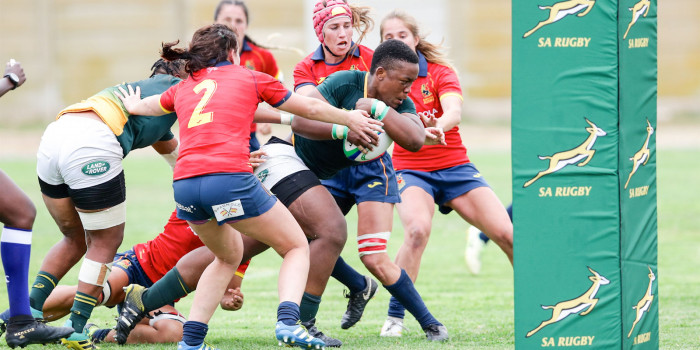 After two victories in the friendlies against Eastern Province (15-55) and South Africa Invitational (5-17), the Lionesses completed their first ever tour outside Europe with an impressive victory against Africa’s leading team, and a team that has already booked its place in New Zealand for 2021.

For South Africa it was a reminder about how tough that World Cup will be. “It was a tough one,” said coach Stanley Raubenheimer. “Spain showed again why they are ranked in the top 10 sides in the world. We created three very good opportunities to score which we couldn’t convert into points, and apart from that there were other things we could do better, which we need to work on.

“That said our scrummaging and lineouts were a little better than the last time we faced Spain, and we put a few good phases together. So, while I am disappointed with the defeat there are positives we can take from the match.”

The final score reflected the effectiveness of Spain in attack, but also the organisation of their defence. This was one of the keys to the eventual dominance achieved by the Lionesses, who absorbed the initial Springboks attacks with good handling and clever counterattacking from Spanish clearance kicks.

This firm defence gave Spain a base from which to attack after the inevitable first handling errors and signs of indiscipline crept into the home team’s game. After a couple of failed attempts, the first Spanish try arrived in the 8th minute, scored by Paula Medín to finish off a great counterattack initiated by Icíar Pozo, who had an outstanding test debut.

Medin received a pass in space and used her raw pace to dash to the tryline. Spain then extended their lead to 8-0 several minutes later compliments of a penalty goal by flyhalf Patricia Garcìa.

The visitors continued to run hard at the Springbok Women as the half progressed and dominated the territory and possession statistics, although their attempts were met with strong resistance as the home side put in several big tackles.

Spain’s determined attack, however, paid off in the 34th minute again as Marìa Calvo, her new role of number 8, with the loss of María Losada due to injury. She crossed the tryline after a number of phases on attack, and the successful conversion nudged them further ahead on the scoreboard.

The game was not all about Spain, however, as South African fullback gathered a smart chip kick, which saw them enter the break 15-5 down..

Spain began the second period where they had left off, monopolizing possession and occupying the Springbok end. With this pressure, mistakes were forced from their opponents and Calvo added another five points, after a maul, with Garcia adding the extras. After this, Inés Bueso-Inchausti and Cristina Blanco came on for their test debuts as the Spanish managers sought to give as much test experience to as many players in the squad as possible.

The reorganisation allowed South Africa back into the game and into Spain’s half with this pressure eventually paing off as captain Babalwa Latsha drove through the Spanish defence for their second try. Tayla Kinsey (scrumhalf) slotted over the conversion, which reduced the deficit to 10 points.

As the match moved towards its close, Spain regained the initiative with long periods of possession before a great break from Iera Echebarría added a further seven give a final score of South Africa 12, Spain 29.

Earlier in the week Spain had recorded a 55-15 victory against Eastern Province.

As with the test that followed, Spain started slowly allowing the provincial opponents to gain an early lead. But Spain recovered to take charge and create holes in the home defence to begin (according to reports from FER) “a of rain points”.