After disappointment in the final four years before, Australia have won gold at the 2022 Birmingham Commonwealth Games. 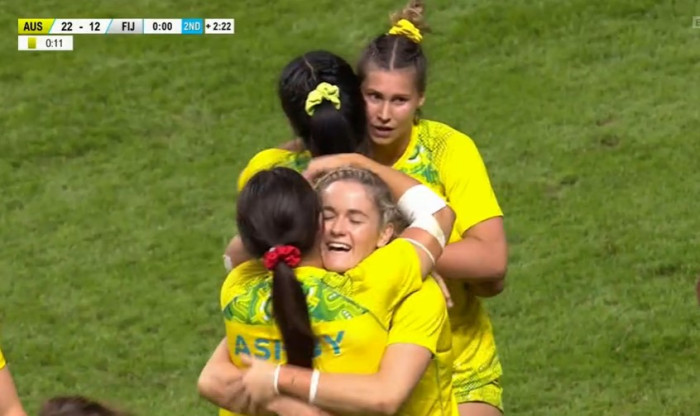 The opening round of games began with three regulation victories for World Series teams against those from outside the series. Australia and England brushed aside South Africa and Sri Lanka – the latter playing outside Asia for the first time. Scotland performed creditably against Fiji, going into the break just try score down at 14-5, but were unable to close the gap in the second half.

The final game was expected to be far closer as New Zealand took on Canada – but it was almost as one sided as the opening three games. After a cagey opening couple of minutes, the Ferns took advantage of a Canadian yellow card to break the deadlock, after which there was no stopping them as 17-0 at half-time grew to  45-7 at the end, seven-try New Zealand showing that their medal intentions.

Round two was much the same with big wins for Fiji, Australia and New Zealand against the non-World Series teams before England took on Canada in what (with New Zealand on form) was almost a quarter-final. England took first blood through Ellie Boatman, but it was Canada who led 12-5 at the break. The second half started badly for England with a Farella try for Canada and a Boatman yellow card. By the time England were back to full strength, Canada were 26-5 ahead and, despite England scoring twice in the final minutes, it was too large a gap to close.

Australia and Fiji had already qualified for the semi-finals, but met in their final pool game to essentially decide who would avoid the Ferns, and in the best game of the pool stage the winner was Fiji, who were incredible. 12-0 up at the break they dominated Australia and went 19-0 up midway through the second half. Australia pulled back to 19-12 in the final minute, but even with Fiji down to six players could not find a way through.

After that, Canada ensured their semi-final place with a 74-0 win against Sri Lanka, meaning that England had to beat New Zealand to make the last four. Unfortunately, the merciless Ferns dominated the first half, leading 21-0 before a Boatman try from the final play got England on the board. Three more New Zealand tries in the second period saw them safely through.

And so to the semi-finals and a game for the ages between New Zealand and Australia. First blood to Australia through Maddison Levi, but the Ferns battled back at the break were 12-5 ahead. The second half was even better, Australia pulling within two points with a second Levi try soon after the restart went ahead 17-12 with Levi scoring again. Cue nearly three minutes of incredible rugby as Australia hung on – despite Levi being shown a yellow in the final minute – to reach the final.

The second semi saw Fiji race to a 17-0 lead before Canada had barely touched the ball. The Canadians pulled a try back just before half-time, before the second half showed the Fijians turn from queens of attack queens of defence, frustrating everything Canada could throw at them before breaking out for a fourth and decisive try with two minutes to go.

In the bronze final New Zealand showed that possession is not everything, as Canada dominated time on the ball in the first half but could not get out of their own half. Meanwhile the Ferns scored twice, and then added a third in the second half. Two late Canadian tries in the final minute gave them and hope of turning the game around, but time ran out and it was bronze for Black Ferns.

A nervy start in the final saw Australia grab the advantage, with Faith Nathan scoring two tries in the first three minutes and Madison Ashby add a third before the Fijiana had begun to settle. As a result, Australia led 17-0 at half-time. When Madison Levi added a fourth try in the first minute of the second half gold looked to be Australia’s. But Fiji battled back and started to show the game that had taken them to the final. Laisani Miceisawana scored as the game entered the final minute, but Australia prevented any further score until the final play when Sesenieli Donu scored a consolation try for Fiji. And Australia had the gold medal!