Le Figaro is not a paper with a reputation for giving copious coverage of women’s sport in France, but it published feature articles on the new Top 16 the week - perhaps for the wrong reasons. 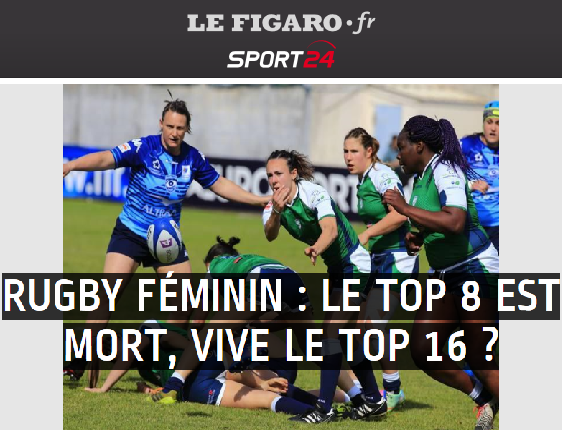 The transformation of France’s elite women’s league from a Top 8 to a Top 16 was a key feature of the FFR presidential election campaign of Bernard Laporte – cynically is might be said that the promotion of eight clubs to the top level instead of one being a calculated vote winner, though in practice the main concern was the need to discover and develop more elite players.

But the one-sided nature of many games this season has attracted the attention of many, including journalists at Le Figaro who challenged Céline Bourillot (Vice President for women's rugby at the FFR) this week as to whether the controversial reform was working.

Bourillot highlighted the positives – “There are some pleasant surprises with promoted teams like Stade Français or Grenoble doing well. And there is not a been any sign of serious injuries due to large differences in level [which opponents of the reform had forecast].”

However, as Le Figaro points out, these are “well chosen” examples – Grenoble’s position in particular benefiting Lille’s loss of key players and coaches over the summer, while Stade Francais had undertaken an exceptional recruitment drive over the summer, in every meaning of the word.

“In the 22 direct confrontations between promoted and former Top 8, the scoresheet is still 20 tries scored for the promoted against 156 for their opponents” reporter Justine Saint-Sevin countered.

Bourillot’s response was – initially – “silence”, followed by the admission “It's true that it's a lot.

“Honestly, I have not met all the clubs yet, but we intend to make a first assessment of the season in November, discuss with them, try to understand what are the big gaps.

“Other than that, teams will have build themselves up, learn to play together. And I'm sure losers will be upset about such results. Yes, it will take some time, and some adjustments, but we are open to discussion. This may be a transitional year.”

“We are not going to make changes and reforms every year. We could have gone to a Top 10, then the next year to change everything again. There was a big discussion before making that step. We consulted widely and the conclusion was that this was the right solution. I concede it may be a transitional year. It is normal for the clubs to be concerned about their situation but you must also look at everything if you want to grow. This formula is new and we need to learn to work together. It's a big project for women's rugby: ultimately we needed a bigger pool of players, to feed our teams”

While that long term aim is understandable, for the clubs the new structure is causing problems, not least with funding. Fewer big matches against clubs with big name players is hitting the pocket. "For the advertisers, the partners, the gap between the teams makes the championship lack a little visibility", says Vincent Brehonniet, Stade Rennais manager, choosing his words carefully.

And it is certainly the case that the newly teams are not nearly as good at promoting themselves with news and information as the former Top 8 clubs, a fact that Scrumqueens has noticed when attempting to compile these weekly summaries.

Ironically these articles appeared shortly after week six, which exclusively saw games between clubs from last year’s Top 8, and between the newly promoted teams, resulting in much close, exciting games than the first five weeks.

This was typified in Pool 1’s top of the table battle between Blagnac and Montpellier where Caroline Boujard’s first half try, plus a Helen Nelson penalty, gave the champions a narrow 8-6 lead at half-time. The game continued to be tight, going to the wire in the second half, Montpellier hanging on to win 15-9.

Romagnat’s early season run – mainly at the expense of promoted teams – has also come to a halt with successive defeats to Top 8 opponents, the latest being a 29-3 loss at home to Rennes, who now slip into fourth place behind Stade Francais who retained third thanks to a narrow 19-12 win at Lons. Pool 1 concluded with a game between the bottom two teams, Rouen moving off the bottom after a 24-7 win against Villelonguet, who have now conceded 309 points in five games.

Pool 2 saw leaders travel up to Lille and come away with maximum points as the new-look northerners continue to try to find their feet. Lille had had an excellent opening 40 minutes with a try early in the first half giving them a 5-0 lead that they took into the break. But a reshuffling of the visitors team for the second half resulted in a very different outcome, tries from Roxane Bilon, Laëtitia Bobo and Fiona Lecat setting up a 30-5 win that puts Toulouse two points clear at the top – with a game in hand.

Bayonne lie second after their 29-15 win in Paris against Bobigny, also coming out on top in the second half after a first 40 minutes that saw repeated changes of lead.

Céline Bourillot’s “surprise success” in Pool 2, Grenoble, had their balloon burst when the returned to action after two weeks off, and conceded five tries at home to Bordeaux in a 31-17 defeat that sees them slide into the bottom half of the table, but they remain well ahead of the bottom two, despite Caen getting their first win of the season, 7-3 at Tarbes.