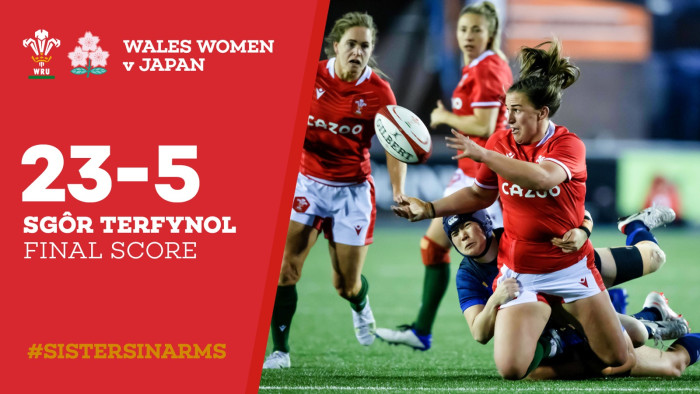 Almost exactly two years since their last teat match win, Wales opened their Autumn programme with a comfortable win against Japan, who were playing the first game of their European tour.

Wales started strongly, with a try coming in only the second minute, Japan having no answer to a Welsh maul, captain Siwan Lillicrap getting the ball down.

However, despite playing most of the opening ten minutes inside the Japanese 22 this was the only score, and when Japan finally broke away they showed that they could be a threat.

But the Welsh defence – helped by handling errors - showed a determination that would continue throughout the game. Despite their pressure Japan failed to get onto scoreboard whereas when Wales returned to the Japanese half they were able to add two penalties that saw them go into the break 11-0 ahead.

Japanese had much of the possession and territory in the second half, but rarely threatened the Welsh line. Wales, on the other hand, were taking advantage of the opportunities that came their way. After 53 minutes Jasmine Joyce was given just a few inches of room that allowed her to sidestep the Japanese defence, and Wales were 18-0 ahead.

More Japanese pressure followed, again without a score, but when Wales returned to the Japanese end they score a third try, Joyce again but this time showing her power to drive through three defenders and score. 23-0.

Japan finally breached the Welsh line with just three minutes to go – Saito getting the score – but this was a well deserved win by Wales that build confidence at the end of a difficult year.