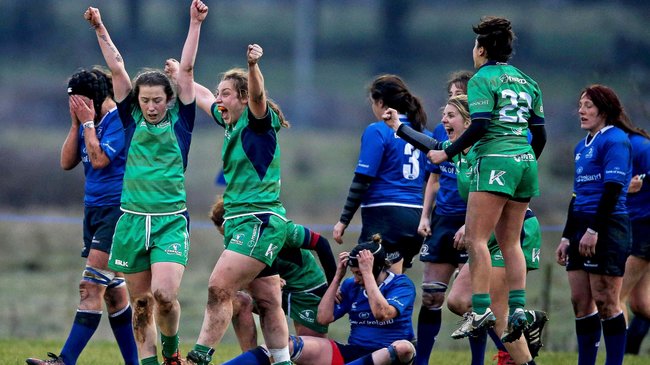 Leinster travelled west on Saturday hoping to begin a successful title challenge in Tuam with a third successive victory over Connacht but found themselves faced with a team determined to exorcise the ghosts of those near-misses.

Five of Connacht’s starting 15 were making their debuts for the province, including Tullamore forward Nichola Fryday who has two Ireland caps, while Galway footballer Orla Dixon took her Connacht bow on the wing.

Full-back Mairead Coyne was instrumental in Connacht’s thrillingly narrow won, scoring the decisive try that gave the home side a 5-0 lead at half-time. Leinster, who were missing quite a few of their internationals, came back at Connacht after the break and the Connacht defence, which had held firm despite everything thrown at them buckled, letting Leinster’s Eimear Corri in for a try.

The Portlaoise RFC winger was making her senior debut for the eastern province having starred in their u18 side during the summer. With the scores delicately balanced at 8-5, Connacht held on in a tense finish for a nail-biting victory.

“We had lots of possession but we should have been more clinical with it,” said head coach John Paul Walsh, the former Connacht Junior and u-17 coach who enjoyed a perfect start to his tenure with the Connacht women’s team on Saturday.

“We have been back in training since the middle of June and that has stood to the team. There was one defensive blip in the second half which ended up in a try scored against us but the girls played very well and I’m pleased with the result. The squad is small with only 25 players so any injuries put us under pressure but everyone is driving each other on to step up to the next level.”

For Leinster head coach Adam Griggs it was how Connacht used the ball that was the decisive factor in their success on Saturday.

“It was a close enough contest but when Connacht had the ball, they controlled it better than us and did more with it than we did when we were in possession.”

Defending champions Munster travelled to Belfast in possession of a pack studded with internationals, seven of the eight who started are Ireland stars, with try-scorer against New Zealand, Niamh Kavanagh, slotting in at outside centre. Winger Eimear Considine, who is a member of the Ireland sevens team, made her debut for Munster.

This Ulster team is vastly inexperienced compared to Munster, boasting Clare McLoughlin as their sole international but they were not awed by the challenge they faced.

Indeed Ulster’s defence held firm, rebuffing Munster’s attacks for much of the first half and restricting their opponents to a solitary try in the opening 40 minutes, which finished 8 – 3 in favour of Munster.

It took the visitors until close to the end to break the deadlock once again, a late break away try and a penalty, giving the scoreboard a much different complexion.

Philip Doyle, who, along with Jarrett Truscott is co-coach of Ulster, was happy with their team’s performance.

“I’m delighted with how the team performed,” said the man who masterminded the Irish women’s Six Nations’ Grand Slam triumph and the march to the World Cup semi-finals that included the first victory by an Irish team against New Zealand.

“Munster had a lot of possession and we were defending a lot but the team played extremely well under pressure. The scoreline flattered Munster but they were the better team on the day and deserved their win. We are getting close to the standard required, and we turned the corner last season and are on the road to getting where we need to be,” Doyle added.

Next Saturday Ulster travels to Donnybrook to take on Leinster while Munster is at home to Connacht in Irish Independent Park Cork.