The top eight teams who will play off for the French Elite league have finally been decided, but not without controversy. 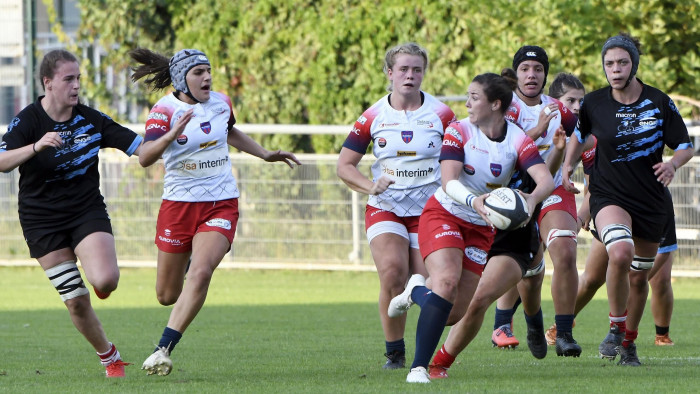 The first phase of France’s Elite 1 league has finally been completed, over two months after it had been originally scheduled.

Most of the teams qualifying for the Championship Play-off were as expected. Champions Montpellier and 2019 runner-up Toulouse won their pools at a canter. Romagnat were also unbeaten in their pool, while Blagnac topped Poule 3 despite an early season loss to Bayonne.

The pool runner-up spots were more closely contested, however, no more so that in Poule 1 where third-placed Lille took the long journey from the north east corner of France to the Spanish border to take on second-placed Lons, who began the game just four points ahead.

A bonus point in France is available for a win by three tries or more, and one minute into the second half Lille were leading 21-5. Furthermore, they were also five points ahead on overall points difference. But with 16 minutes to go a yellow card for Laura Di Muzio gave the home team the chance they needed. Two minutes later a try from Alexia Cerenys was converted by Audrey Champagne. Despite being reduced to 13 players in the closing minutes of the game, Lons were able to prevent another Lille score, ensuring that they qualified for the play-offs with a points difference of -62, compared to Lille’s -63.

Rennes and Bayonne qualified from Poules 2 and 3, but the outcome of Poule 4 provoked controversy and accusations of unfairness.

Bobigny’s final Poule 4 game was scheduled to be a visit to Grenoble, who had not managed to register a single point all season. The expected win was all Bobigny needed to reach the play-offs, but a last minute COVID case in Grenoble forced the match to be cancelled.

But the FFR had not scheduled any extra dates to play postponed games – instead the points from the cancelled game were shared. Bobigny were officially awarded 2.2 points – and missed out on the play-offs by 0.8 of a point, Bordeaux taking the place

Coach Alexandre Gau was less than happy: “We have been ahead of Bordeaux all season! We went achieved a defensive bonus at Romagnat, which they didn’t… And in our first meeting away at Grenoble we win by 35 points, so we expected to do at least as well here.

“It was Grenoble that contracted more than three cases of Covid - much more than that apparently- so it’s not even our fault… Cases were identified 11 days before the match, so Grenoble could have isolated.

“On Sunday, we sent emails to all those responsible for women's rugby at the Federation but we did not receive an answer ... The schedule for the second phase was then published on Monday evening, and we are in the play-down. We were simply directed to the regulations as an explanation. All the girls are demoralized. It's really incomprehensible.”

The top 8 teams have now been divided into two pools of four, with the first three rounds being played before the Six Nations, starting this weekend.