Counties Manukau have moved to the top of the Farah Palmer Cup Premiership - despite losing to Wellington. 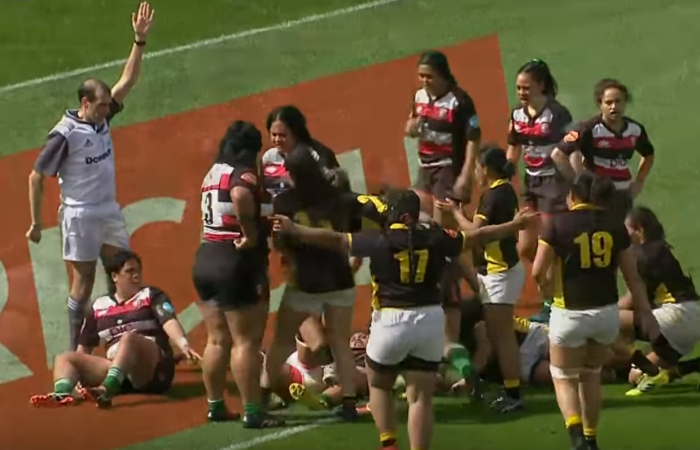 With week two leaders Canterbury having a week off Counties edged ahead thanks to two bonus points gained in their a 38-36 defeat to Wellington.

The win moves Wellington to 10 points, the same as Auckland who beat Bay of Plenty 28-19, and Canterbury, with the trio two points behind Counties.

Auckland were well worth their win over Bay of Plenty, who paid the price for not looking after the ball. It continued a winless start to the season for the Bay of Plenty women and they face a tough battle to make the top four.

The Volcanix made all the play in the first 20 minutes but were not able turn that dominance into points. Auckland scored three tries to lead 21-0 at the break before a much-improved Volcanix effort in the second half provided an entertaining finish.

Volcanix fullback Sapphire Tapsell plucked an intercept out of the air and scooted away for a try in the 70th minute to give her side hope. Auckland again forced turnovers to shut the Volcanix out, but not before 19-year-old Volcanix replacement back Nadia Flavell scored on fulltime.

Counties Manukau came up short by two-points against Wellington who once again left. After edging Bay of Plenty last week courtesy of a last-gasp try, the Pride picked up their most impressive result of the Premiership campaign by beating Counties Manukau 38-36 in similar fashion at Westpac Stadium on Sunday.

Black Ferns lock Joanah Ngan-Woo was the hero for Wellington, scrambling over for a try with only four minutes remaining to level the score 36-all, before Amanda Rasch slotted the subsequent conversion.

Counties looked to have won the game when Lavinia Tauhalaliku sprinted clear of the defence and scored in the right-hand corner. But the Heat were unable to withstand Wellington's late rally, with Shontelle Woodman's 75th minute yellow card forcing them to defend frantically with only 14 players.

Elsewhere, there was a thriller at Central Energy Trust Arena on Saturday as Chelsea Alley slotted a late drop goal to give Waikato a dramatic 15-12 win over Manawatū.

Auckland bounced back from last week's defeat to Canterbury to beat Bay of Plenty 28-19 at Rugby Park, outscoring the opposition four tries to three.

Rebecca Kersten inspired Tasman to a 36-22 win against Taranaki at Yarrow Stadium. The winger, who has returned from a season playing sevens in Japan, set up a spectacular try for Tamara Silcock and before scoring two of her own as Tasman raced out of the blocks to lead 26-0 at halftime.

Championship leaders Otago continued their perfect start to the new season, running in six tries to secure a comfortable 40-7 win over newcomers Northland at Trigg Stadium.

Chasing Otago hard are Hawke's Bay who beat North Harbour 39-10 thanks to a double from reserve prop Moomooga Palu..