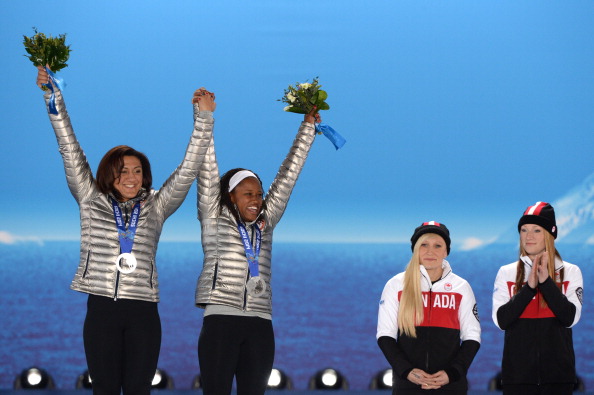 Elana Meyers (pictured above left)  joins the squad straight from a silver-medal winning stint at Sochi in the women's bobsleigh while Leyla Kelter has already had a lengthy international career representing her country.

In 2008, she was named to the United States Women’s Ice Hockey Under-18 national team for the 2008 world championships, where the U.S. won gold. Kelter has also toured the world with the U.S. Women’s Soccer Under-17 national team and was a standout at the 2009 Under-18 and Under-20 Women’s national team camp.

“I found out about her from Lorrie Clifford, who knew her from high school,” Suggitt said. “She said she might be interested but she had a bit of school work to finish off this year. So we got in contact and invited her out to camp. She did quite well.”

Kelter, who goes by Alev, was at the women's training base in January when  Canada’s women’s sevens team was in town. She made her first appearance for the Eagles during one of the training sessions.

“When Canada came in and scrimmaged with us we threw Alev in right away,” Suggitt said. “I think the second time she touched the ball she cut through the Canadian back line and scored a try. She’s not shy about her tackling, she has good athletic ability, she’s got a great attitude.”

Meyers returns to the US camp after spending most of February in Sochi where she was pipped for gold by a pairing that included another former international women's rugby player - Heather Moyse.

Suggitt saw Meyers prior to her departure to Russia and gauged her interest in trying rugby sevens for the next edition of the Olympics.

“With Elana we see the same thing; we’ve seen her train and she’s got a good attitude,” Suggitt said. “She’s demonstrated that around the Olympic Training Centre every time I saw her. Obviously we know she’s determined and a good athlete. Whatever she puts her mind to she can do, so I think if everything goes the way it’s gone for her in the past we’ll see her around for a long time.”

Meyers is on a one-month contract in Chula Vista, while Kelter will be with the team long-term.