Fiji and Netherlands went through day one of the World Sevens Series Qualifiers unbeaten in Hong Kong on Friday as eight sides moved a step closer to securing a core place on the circuit. 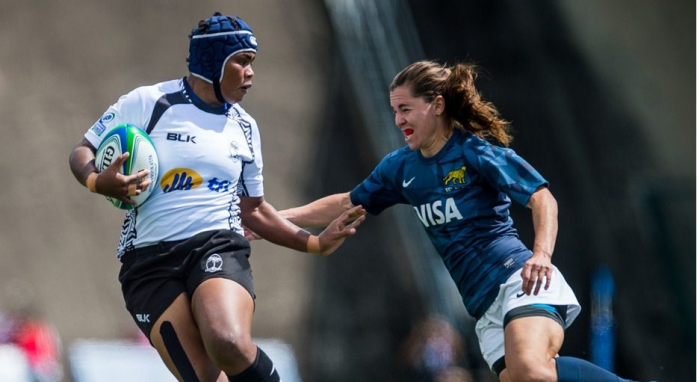 Fiji were imperious in their pool comfortably seeing off Argentina, Kenya and Japan with some ease. Japan finish day one in second place behind Fiji with two wins from their three games. Japan now join Fiji in the Cup quarter-finals.

In the second pool there was huge competition with France, South Africa and China all losing one game and winning two. South Africa started brightest with a two point win over France but were then undone by an excellent China effort after the Chinese had beaten Mexico. France made up for their first loss by then hammering Mexico and they powered home to defeat China in the final round. It meant all three sides were locked together at the top of the table however,  France, with a number of their players having been involved at Women's Rugby World Cup 2014, topped the pool by virtue of a better point difference.

In the final pool Netherlands came through unbeaten though none of their wins were by large margins. They survived a scare in their first match after trailing hosts Hong Kong 10-0 at half-time, before coming through to win 12-10 and then overcome Portugal 14-0 and Brazil 7-0. Hosts of the Rio 2016 Olympic Games, Brazil remain in contention for a core team place on the Series after also beating Portugal and Hong Kong.

Portugal and South Africa complete the quarter-final line-up as the two best third placed teams. Portugal have surprised many at this tournament as they have shown some good speed and committed defence. They put on a show in the final game of the day against Hong Kong as the hosts – coached by Black Ferns legend Anna Richards – fought back from 19-7 down to draw level with a minute left on the clock. There was to be no dream victory, though, as Portugal scored a final try to seal victory.

While their dream of joining the IRB Women’s Sevens World Series as a core team in 2014/15 is over, there is still plenty for Argentina, Mexico, Hong Kong and Kenya to play for on Saturday as they contest the Bowl semi-finals, which kick-off at 09:32 local time (BST +7 hours).