Czechia have gone top of the 2021/22 European Trophy after a record win against Switzerland – but have to wait for Switzerland’s game against Sweden next spring to see if they can retain their title. 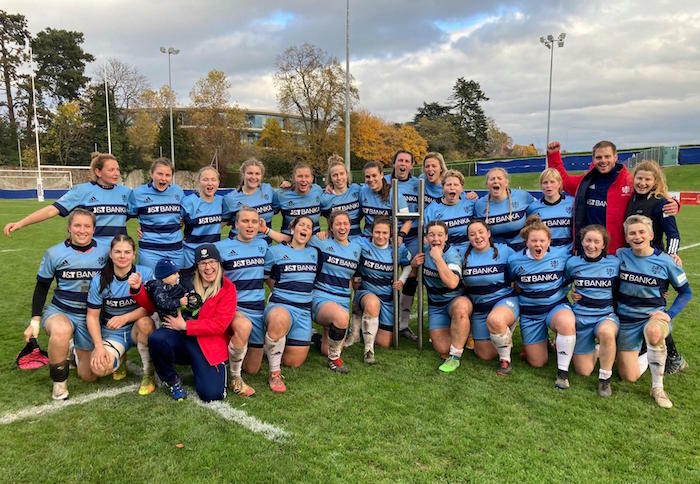 Czechia – the reigning European Trophy champions – have completed their 2021/22 programme with a 27-0 win against Switzerland. The result meant that the Czech’s retained the Konektor Cup, was the Czech’s largest win in the fixture, and equalled their largest ever win.

It was the latest step forward for Czechia and should see a team that was ranked last in the world as recently as the end of 2018 move well into the top 40, perhaps (dependent on other results over the weekend) as high as 36.

While Czechia’s final game in this season’s Trophy, it was the first for Switzerland – and also their first since November 2019.

The Czechs only took three minutes to get onto the scoreboard. The first lineout near the Swiss line was worked quickly to the opposite side of the field, and Tereza Baťhová went over in the corner.

Czechia continued to play the all-out attacking game that they had against Sweden and Finland, making as much use of their fast backs as possible. Although at this level it is a high risk game that results in a lot of errors – errors that the Swedes capitalised on – it is a tactic that both Finland last week and Switzerland this week found difficult to cope with.

After defending well against a period of Swiss pressure, the Czechs attacked into the Swiss half on the quarter-hour and again came away with a try, Kateřina Čaky Nováková finishing another Crossfield backs move, this time from left to right, to score in the corner, giving the visitors a 10-0 lead.

As the first half drew to a close the Czechs added a third try, and a second from Baťhová, whose run sliced through the Swiss defence, giving Czechia a 15-0 lead at the break.

Nováková added her second try and the Czechs fourth four minutes into the second half, again scoring in the right corner.

The rest of the second half was a tight battle with no side having an advantage, until right at the end when Pavlína Čuprová was able to cut through a tiring Swiss defence for a fifth try, converted by Julie Doležilová.

Czechia now lie on top of the European Trophy with 10 points from three games. Sweden lie second with 9 points from 2. Finland (2 games) and Switzerland (1) have yet to record any tournament points.

The final two games in the European Trophy will take place in the spring.