A year and a day ago, after 15 years of effort, Czechia finally won their first test match. Since then they have not lost one, and today lifted the European Trophy for the second time in an astonishing year for the rising stars of central Europe. 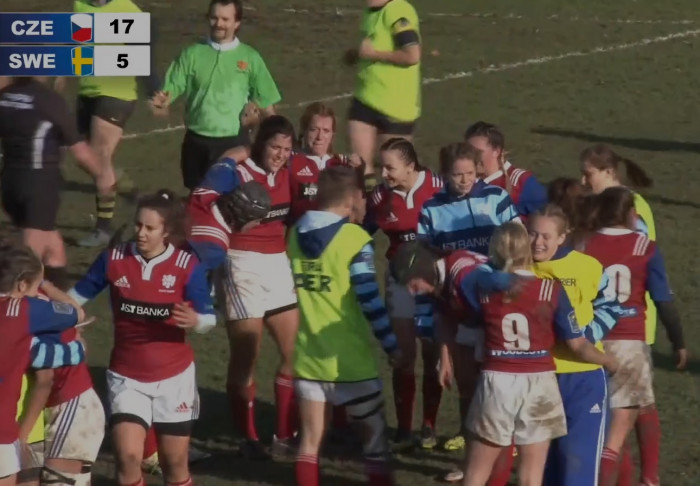 Czechia – until a couple of weeks ago the lowest ranked nation in women’s rugby – have won the European Trophy again, after an impressive win against tough Swedish opposition.

An historic day for Czech rugby did not start well. Within three minutes Swedish win Felicia Melin scored the games first try after a series of errors by the nervous home team.

After that shock start, however, the Czechs soon settled down, dominating possession and with the help of a solid pack, playing much of the game in the Swedish half. A quarter-hour of continual pressure final told when Katerina Novakova found a gap to level the scores.

The rest of the half was largely deadlocked, with neither side able to find a way to threaten the opposition line, and the teams went into half-time at 5-5.

Czechia put pressure on the Swedes again at the start of the second half, eventually forcing a handling error that Petra Vacoka seized upon, kicking ahead and then just winning the footrace, diving on the ball to put the champions ahead 10-5.

The Swedes now threw everything they could against the Czech line, but it held firm, as it had throughout the tournament, with the Swedes rarely taking the game to the Czech 22 despite 20 minutes of possession.

As the game entered its final moments, the Czechs finally found their way back into the Swedish half. Winning a scrum on the left the ball went down the line to replacement Hana Behalova who, faced with tired Swedish legs, smashed through the Swedish line and ran 40m and score under the posts – perhaps the try of the tournament so far. Vackova added the conversion.

The Swedes’ restart managed to hit the referee, but once the game restarted properly Czechia were back on the attack again. A break by Zuzana Skokanova was just hauled down short, before the whistle went – and the Czechs and their enthusiastic crowd could celebrate another European title.