A home World Cup in 2025 could see the ‘Holy Grail’ of a sold-out Twickenham achieved, believes Red Roses legend Katy Daley-Mclean, who spoke to Paul Martin. 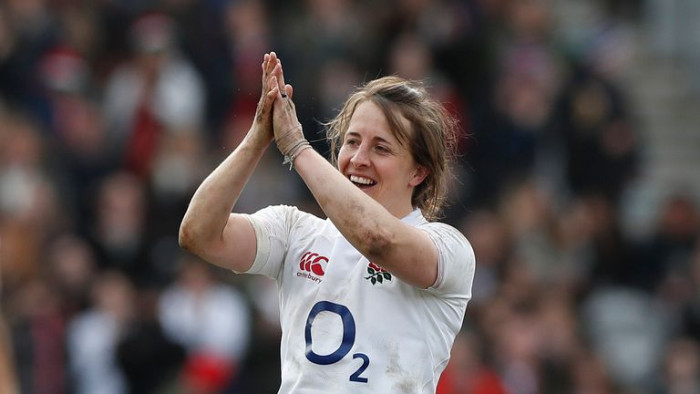 The RFU confirmed last week they will be bidding to host the tournament for a second time having previously done so in 2010, when England finished as runners-up with Daley-McLean at fly-half.

The game has evolved immeasurably since then – Daley-Mclean juggled her World Cup commitments 11 years ago with a full-time job as a primary school teacher – and the 35-year-old believes hosting the showpiece event - which has now recieved government investment -  would be the next step in pushing momentum forward.

“It would be absolutely huge,” she said. “2010 really kicked on the women’s game in England and they underestimated the appetite that was there.

“The numbers and standard have evolved hugely in the last 10-12 years, both in England and internationally, so this would be another level.”

And having seen England’s cricketers lift the World Cup in front of a packed Lord’s in 2017, Daley-Mclean is daring to dream of a similar scenario across the capital in four years’ time.

“I’ve sat in many rooms talking about the aims of the women’s game and trying to sell out Twickenham has been the Holy Grail,” she said.

“A World Cup where you get to build momentum, hopefully with England in a final, gives you the best opportunity to really achieve that.

“Five or six years ago, you maybe thought it was too far away but this gives a real opportunity to strive for it.

While Twickenham would be the ultimate ambition, Daley-Mclean is equally passionate about ensuring the tournament would be taken across the country if the bid is successful.

The 2010 edition was played at the University of Surrey and Twickenham Stoop, but upcoming autumn internationals against New Zealand at Sandy Park and Franklin’s Gardens are examples of the venues the World Cup-winning captain would like to see come to the fore.

“Obviously London is massive to the women’s game but it’s really important the rest of the country has an opportunity to get involved in it,” said Daley-Mclean, who hails from South Shields.

“If you look at successful World Cups, the best ones are when the games are moved around and people can get behind that rather than having to travel to London.

“It’s a really sensible but exciting move to put the tournament around the country. It’s about building that following nationwide.”

“The legacy is just as important as the World Cup,” she said.

“How do we use that opportunity to change the women’s game for the better? You put a global event in the country and massively support it.

“With the funding that may be used, it will be done properly and have maximum impact.

“The beauty of tournaments is they’re so tightly packed together so you can build that excitement and feel part of something, especially if the home nations are going well.

“The hope is that more players come back into the game or watch their local club as they’ve enjoyed the World Cup atmosphere.”