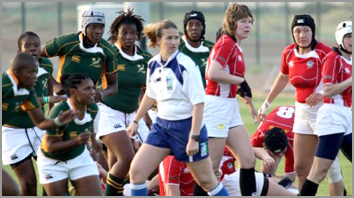 Dana Teagarden was born and raised in rural Paola, Kansas and attended the United States Air Force Academy, where she began her rugby career. In the second semester of her freshman year in 1988 she joined the rugby club and by her junior year of playing at the Air Force Academy, Dana was co-MVP of the 1991 Division I Womens Collegiate National Championship team. This accomplishment was quite impressive considering Dana was only in her third year of playing rugby. She quickly acquired her high-level rugby skills largely due to her athletic and strength base from playing high school sports as well as from growing up on a farm. But Dana also credits the rapid development of her playing skills partly to her experiences as a referee.

Dana was still fairly new to rugby and its rules in 1989 and she couldnt get consistent answers on questions she asked players, referees, and coaches. As a result, she decided to pick up a lawbook and get to know the game more thoroughly. Her past experience with rules as a referee in high school aided in her dissection of the laws of the game and it gave her an understanding of how to read and interpret the legal intricacies of the game. The intent to gain further knowledge on rugby was paired with the intent to become a better player by gaining every possible advantage she could. In this case, Dana felt that supreme knowledge of the laws of rugby and an understanding the game from a referees point of view could give her a big advantage as a player. Her beliefs turned out to be true, as she was selected to the Womens Eagles player pool in 1991, just three years after she picked up the sport.

This expanded understanding all began one day in 1989, just one year after she began playing rugby, when a friend of Danas told her to grab her kit and come watch a match he was officiating. Dana showed up to the pitch on a Saturday unsure of how the day would unfold and just ten minutes into the match, she was unexpectedly handed the whistle and told to finish the game. The match went smoothly and from then on she began anaccelerated learning curve for the game.

Dana continued her playing and refereeing career for the next 10 years and then, after a short stint away from the game, returned to club rugby play with the Las Vegas Womens Rugby Club. But after being in the Womens Eagles player pool for five years, and refereeing for ten, Dana was not interested in playing socially; she decided it was in her best interest to participate at the highest level she knew, so she re-started her refereeing career. The contacts Dana had made up to 15 years prior still stood and because of this, she was able to jump right back into rugby.

In May 2005, Dana received her first international appointment for the U19 Girls Canada vs. England match played in Canada. From there she refereed the NAWIRA 7s in 2006 and was selected as an assistant referee for the Womens Rugby World Cup, also in 2006. During that 2006 Womens World Cup, Dana was chosen to officiate the Kazakhstan vs. South Africa match. This was a major opportunity in her referee development because if she performed well, she would continue to referee high-level international matches. Dana thrilled the referee selectors in that first WWC match and as a result she was appointed to referee for the 2007 San Diego 7s.

In San Diego, the IRBs Paddy OBrien appointed Dana to six matches and she was the head referee for the Bowl Final of Tonga vs. Argentina. The Bowl Final match was particularly important for Dana because the two teams had played the previous week and the referee had lost control of the match setting the stage for this to be a difficult affair; Dana proved herself as a quality referee in that match when she controlled it from her end while the players took it into overtime.

All matches are different, but they all require equal amount of focus and attention. The objective Dana has for each game is to be the right referee for the game at hand, which can be helped by attempting to understand the teams strategy in order to know where the game will likely be headed. Regardless of the level of play, Dana goes into each match with the intent of providing the players boundaries for play while effectively communicating these boundaries so the players can have more control over the game. When this is done there are no surprises during game play and both teams can play to the best of their abilities without worry of surprise calls.

With the above in mind, Dana said, It is important to understand that referees must be active, not passive. Doing and saying nothing is an active decision that can drastically affect the game. When talking about the way a game is viewed from her point she made an analogy to roads and their warnings for tired and distracted drives, Players must know you will be there to guide them back. The ridges on the road are your verbal warnings, the penalties are your reflective triangles, and the rail guards are your cards.

Dana feels that trust is what keeps the referee and player relationship going and, in turn, allows for the game to take its natural course. If players trust a referee and their judgments they will play right to the boundaries, and when players can play to the boundaries, they can play to the best of their abilities. Dana has engraved the above ideas into her mind and instinctively acts this way so that everyone involved can thoroughly enjoy the game.

Danas hard work and devotion to improving her understanding of the game lead to her accomplished playing career, and an even more outstanding refereeing career. Shes been able to win a National Championship, represent her country as a player and travel the world as a highly respected official. She is truly a picture of what is possible in the sport of rugby when someone decides to pursue the game at its highest level.