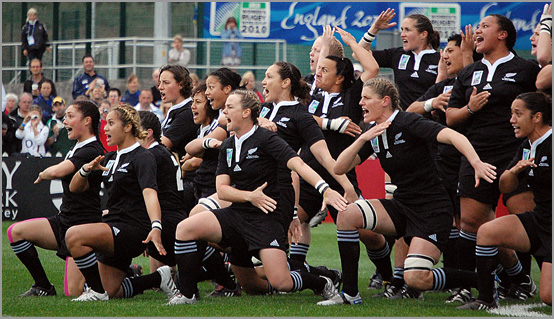 Find out how the matches in Pool A are going on day two of the World Cup. South Africa beat Wales in the first match of the day while New Zealand are playing Australia this afternoon.

A determined South Africa weathered an early storm from Wales to see this exciting game of rugby out.

South Africa led 10-0 at half time in a match which you could have only seeing going way after the first quarter. It was all Wales for the first fifteen minutes with their superb lineout causing difficulty for the South Africans and with some impressive play from Catrin Edwards and and Lowri Harris in attack. Non Evans missed an early penalty and then in the wind Wales opted not to kick two even more kickable penalties minutes later, going for a scrum and then a lineout and scoring from neither.

That let South Africa off the hook as flyhalf Zenay Jordaan and number 8 Namhla Siyolo came more and more into the match. The South Africans missed a penalty of their own then after a promising attack but when their try scoring chance came they took it well with Siylo crashing over from short range. Wales could only blame themselves after they opted not to clear their 22 with a kick but attempted to play it out and ultimately turned it over.

The second South Africa score came from a similar position, Wales failed to clear, the Sprinboks won a penalty and then Catrina Nicholas was yellow carded for not letting them take it fast. South Africa then ran their penalty and scored out wide through Charmaine Kayser.

The second half replicated the first - Wales started the better team but their chanced in the South Africa half came to nothing. A great individual effort then from fullbak Zandile Nojoko pushed out the lead to 15-0 and you sensed the game was up for Wales.

Non Evans put over a penalty to get Wales on the scoreboard at 15-3 and then her side really did come into their own with a number of storming runs from Mared Evans almost getting them close. Finally they went over when Elen Evans cut through the middle and Non Evans converted. They almost snatched it at the end with a burst from Naomi Thomas but it was too little too late as South Africa saw out a famous World Cup win.

New Zealand continued their dominance in pool A with a clinical victory over rivals Australia.

New Zealand began the game with much of the territory and while Rebecca Mahoney failed to convert an early penalty, the Kiwis were quickly on the score board. A second penalty immediately after was kicked to touch. The clean take from Victoria Heighway at the lineout was driven towards the Australian line with Fiaoo Faamausili touching down.

Despite continuing to make uncharacteristic errors, in particular passes not going to hand, New Zealand then built on their opening score with a flourish of tries. One from Carla Hohepa under the post (converted by Mahoney) quickly followed by two from Justine Lavea, giving them the bonus point early on.

Australia responded with a period of possession, which saw them challenging, but ultimately unable to cross the New Zealand line.

New Zealand started the second half in much the same vain as the first with an early try from Victoria Grant, but this time Australia responded quickly and were able to cross the whitewash with a try from prop Lindsay Morgan. The final score of the game came after a quick line out from New Zealand challenged the Australian defence, which was stretched out wide leaving room for Huriana Manuel to score in the corner.

The game unfortunately finished in scrappy style with possession changing hands at frantic pace. Tiredness or the raft of changes made by both teams may have been the cause, or perhaps the knowledge that the game had been won some time ago.

The score line may suggest otherwise, but we have not seen the best of New Zealand as yet and one suspects we will witness a far more clinical display come the business end of the tournament.