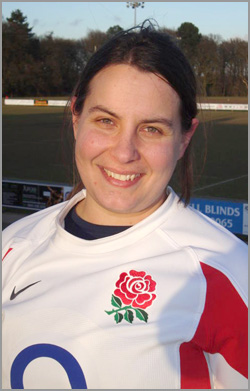 Rugby fans may not be aware that there is an England Deaf Rugby Union, may not know of their fixtures, squad members and are most likely unaware that they have grown to encompass a womens squad.

The England Deaf Rugby Union (EDRU) was set up by Marce l Hirsham and Steve Wherry to enable deaf and hard of hearing people to come together to enjoy the sport of rugby union, as well as allowing them the opportunity to represent their country. Following the first ever (mens) Deaf Rugby World Championships in New Zealand in 2002, it was decided that England should also have a team.

The mens team is now well established and will face their Welsh and Scottish counterparts during the traditional Six Nations peiod. The team have even appeared on Total Rugby when they faced the full Estonia international team last year and on the BBCs See Hear when they faced Wales in February.

Whilst the EDRU was founded in 2003, the EDRUW is a new venture, with the female squad being very much in its infancy and actively seeking elligible players and opposition.

To be eligible, players must be deaf or hard of hearing, but do not have to have complete hearing loss. To qualify players need to have a combined average hearing loss of 25db or more in both ears.

Therefore, not all players solely communicate by sign language, but the EDRU say this does not prevent players communicating effectively.

Likewise, England Deaf see no impediment to any person with any level of hearing loss playing rugby union with hearing players, something all players do at club level. When asked why there was therefore a need for a separate England Deaf team Tony Stoyles, Director of Rugby, explains there is no doubt that being deaf or hard of hearing presents special difficulties.

The England Deaf team allows players to compete for national honours as an elite team when their lack of hearing would probably prevent them playing for the national side.

Whilst many players usually wear hearing aids, it is the rules of International Deaf rugby that hearing aids are not worn during an international match. IRB rules state that a player may not wear any communication devices, which includes a hearing aid, although new rules have been put in place to allow cochlear implants. As such, the Laws of the deaf game are exactly the same as we are used to, although visual signals are utilised for the setting of the scrum.

The EDRU was an RFU Associate Member for sometime, but is now recognised as a fully integrated national representative team and as such Deaf England now have access to RFU facilities and staff providing them with kit and hopefully future funding, which will allow them to grow and flourish. However, at present the womens squad comprises of just six females, including Elizabeth Mileham (OA Saints), Debbie Challoner (Tottonians) and Jessica Everhurst (Stourbridge).

Stoyles says The EDRU encourage clubs to accept deaf and hard of hearing players and will provide guidance and deaf awareness to help clubs accomodate these players; a step that is necessary to develop players in order to grow the England squad.

In fact, this week has seen the launch of a video project showing players signing rugby buzz words to help coaches communicate with deaf players. The EDRU created the clips in partnership with the Rugby Football Union as part of a programme, Me2, run by the National Deaf Childrens Society.

Sale Sharks World Cup winning England wing Ben Cohen, who is clinically deaf, said Rugby is one of those sports where being deaf need not be a barrier to playing whether at grass roots or international level. Its a game that relies on instinct as well as skill, and while there will always be challenges for deaf or hearing impaired players, the opportunities are comparable as for any other player.

With such initiatives and the forming of the EDRUW it is hoped that more deaf women will be encouraged to take up rugby union and boost the England Squad. ScrumQueens hope that in the not too distant future we will be able to report on the first ever female deaf international rugby fixture.

More information about the EDRU can be found at www.englanddeafrugby.com

The Me2 rugby clips are available free at www.ndcs.org.uk/rfu

Deaf Englands appearance on See Hear can be viewed here