It's been a couple of years since we last looked at the development of deaf women's rugby - but players worldwide are about to face their biggest challenge ever. The first World Deaf Sevens, in Australia.

Fiona Tomas reports on preparations - and the challenges faced by self-financing athletes. 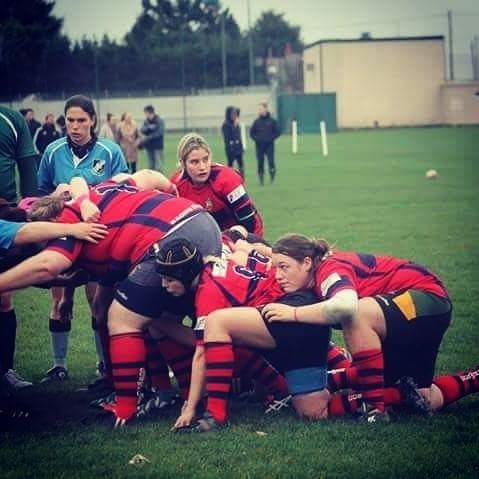 ANOTHER women’s Six Nations has passed – and another chance dawns to throw some media attention on women’s rugby and document its latest journey as it leans towards professionalism.

Yet while we are ephemerally caught up in how squads are adapting in a post-World Cup year, elsewhere in the rugby family, there’s another form of the game which can perhaps identify with the longing for such media coverage – deaf rugby.

But that could be about the change.

The World Deaf Rugby 7s will burst onto the global rugby scene in next month – 18 days after the Commonwealth Games and three months before the Sevens World Cup – bulking up what is already a jam-packed year in the rugby sevens calendar.

The first of its kind anywhere in the world, the tournament will feature men’s and women’s international and Barbarians rugby 7s teams in a bid to raise the profile of deaf rugby and boost encourage greater participation.

Deaf rugby athletes are able bodied with various degrees of impaired hearing, playing a game that is no different to mainstream rugby. But with the sport excluded from Paralympic status as well as not forming part of the Deafalympics, it’s little wonder deaf rugby has a hard time competing for media attention.

So how significant, then, will this tournament be?

“This is the big event, hopefully deaf rugby can push on and get noticed around the world,” says Beth Weller from Studley, Birmingham, who is self-funding her goal to play in the competition. “Women’s sport is receiving a lot of investment now and media build up – and for deaf rugby, it’s mainly about getting similar media exposure.”

Beth points to the three-series test win which England men won against the Deaf-Blacks – New Zealand men’s deaf rugby team and the video the RFU created and shared across social media.

“That video showed there is an audience and the potential to tap into people like that. It’s just getting the word out there and getting coverage,” she says.

Like many in women’s rugby, Beth came to the egg-shaped game late – when she was at Oxford Brookes University, inspired off the back of the 2011 Rugby World Cup and after a friend took her to see a game at Gloucester. She recognised she had a talent and progressed to play for England only a year later.

Beth didn’t make the cut for national side this time round, but a place on the Barbarians side and a plane trip to Sydney offers a unique opportunity for the scrumhalf who plies her trade at Cheltenham Civil Service RFC.

“I’m excited to meet new people and it will be interesting playing against my England teammates,” says Beth, who has “cookie-bite” hearing loss, which means she struggles to detect middle frequency sounds and those in speech.

She has only met one other person with the same condition – and it poses its challenges on the pitch.

“It’s mainly hearing the calls,” says Beth. “I have to concentrate or look around if I’ve got my head buried in a ruck. I have to remind myself to keep looking at my 10 and people around me. At my club, I’ll have my 10 put their hand out when they want the ball. There isn’t any difference, other than that the referee will use hand signals, that’s pretty much it.”

Beth needs to raise £2,500 to fulfil her dream, which she has described as the “opportunity of a lifetime.”

She is currently looking for sponsors who will give her increased exposure in the run up to the event.

“Being part of the Barbarians squad gives the opportunity to meet players from all over the world,” she said. "There are different sign languages for different countries. It’s going to be quite tricky, but for training we’ll have interpreters. It is just a case of trusting your team mates on the day that everyone will be on the same page.”