Brad West chats to Ireland star Lauren Delany about her late conversion to rugby and balancing club rugby in England with her international career. 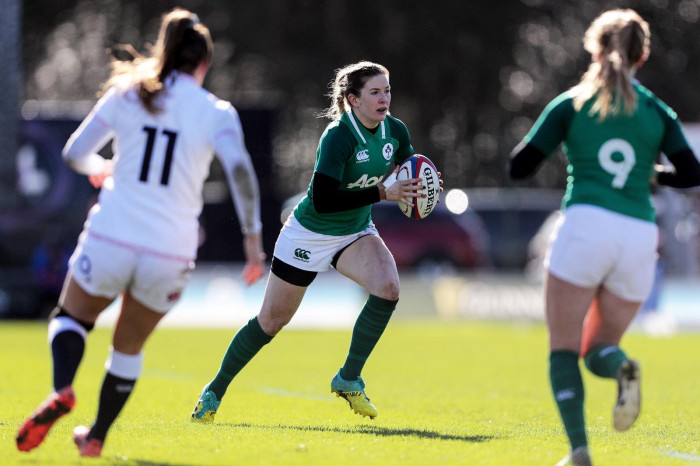 Unlike many at the elite level of rugby, Irish wing Lauren Delany was never destined to turn out for her country. In fact, it wasn’t even her game.

The 31-year-old Dubliner has now been capped 14 times for the Irish squad, but it was with a bouncy orange ball, not a white oval one, that she first made her name.

Delany was a basketball star in the making from the moment she picked up the sport at the Irish-speaking school Coláiste Íosagáin in Dublin, where she won All-Ireland medals, graduating to international honours at age group level.
It was only after moving to England to do her master’s degree that Delany, who has developed a career in performance nutrition and now works for rugby league side Leeds Rhinos, swapped the court for a pitch.

In 2018, she was spotted at a talent ID day by none other than Ireland head coach Adam Griggs—and the rest is history.

“I played basketball for 15 years, played underage for Ireland as well, and I moved to Milton Keynes for a new job with Badminton England,” she said.

“There was no basketball there, so I decided to go with a friend from work to our local rugby club and tried it for the first time when I was 25.

“When I got to the Ireland under-23s [in basketball], unfortunately, all the funding for the women’s and men’s senior teams got cut, so that avenue wasn’t there anymore.

“After I did my undergraduate university degree in Dublin, I then decided the best route for my professional career was to move over to England to do my master’s [in 2012]. And basketball became the lesser priority in my life in comparison to my nutrition career.”

It didn’t take long for Delany to get her first chance with Ireland, making her debut against the United States in the autumn of 2018.

She’s been running with the opportunity ever since. In fact, it’s her pace that has made Delany, who plays club rugby for Sale Sharks in the Allianz Premier 15s, stand out.

Ireland’s speed in attack has helped the side develop into a promising outfit. It was on display in their opening contest of this year’s Women’s Six Nations, as they triumphed over Wales 45-0 thanks to Eimear Considine and Beibhinn Parsons both dotting down twice.

And while that pace wasn’t as evident in Ireland’s 15-56 loss to the highly talented French squad at the weekend, it’s still something that excites Delaney about the future.

“I think if you look at the squad we have, we’ve a huge range of not only ages, but players in the 15s and the sevens as well,” she said. “We do have a good range of speedsters on the team.

“Whether it’s Beibhinn, or on the broader squad, Amee-Leigh Murphy Crowe from the sevens as well. Then you’ve got a few more ball players, the likes of Eimear

“It’s a really exciting time to be in that back three and again, you’ve got the likes of Sene [Naoupu], and Hannah Tyrrell in your half-backs as well.”

Unlike many of her teammates, Delany’s past six months haven’t featured a rugby void, with the winger able to play for Sale across the autumn and winter.

And she believes Ireland can only benefit as a team from the experiences gained from those playing top-level club rugby.

“It has been great playing with Sale over the last year and joining a new club,” Delany said. “Again, playing at a really high standard in the Premier 15s.

“I think obviously playing against a lot of top-quality international players, I’ve certainly learnt a lot tactically and technically, that I can bring into the squad and all the girls that are based over here. I think that’s only another good addition that we have to the squad.

“Players playing in different countries and adding different elements to the Irish set-up as a whole. They ask quite a lot of questions about how we play against other international players.

“It brings a really good dynamic and again, I’ve been very privileged and lucky to continue to play rugby every week over here. Hopefully that will add to my development and my role within the squad too.”