We caught up with England wing Abby Dow ahead of Sunday's second test against New Zealand. 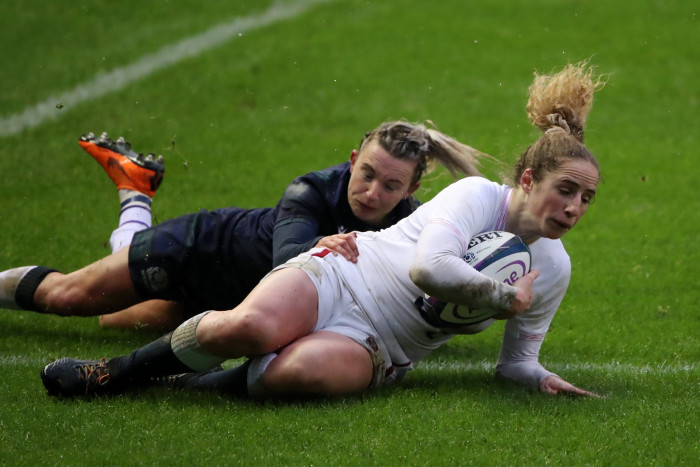 With 19 tries in her 20 caps so far, it’s safe to say that Abby Dow has taken to life as a test rugby player very well indeed.

Overlooked initially for a fulltime contact when they were introduced in the England camp in 2019, Dow put her head down, carried on scoring tries for Wasps and her country, qualified as a mechanical engineer at Imperial College and is now a nailed-on starter and permanent contract holder.

Last weekend was her first ever game against New Zealand, though she expects a rather different experience this Sunday.

“You have to respect the fact they were in a very different situation to us,” she says.

“Given how the pandemic impacted sport in New Zealand compared to here, we were much better off in rugby terms, and we were able to have more exposure to rugby and play our games throughout last season. The Premier 15s league carrying on too was important as it’s become so competitive with a lot of international players involved. So we had a healthy league backed up with test games to prepare and they had far more disruption.”

All that said, Dow concedes that England were very pleased with their performance and that there were some minor celebrations.

“Everyone was pretty happy with the game.  It’s a significant thing to get a result like that on their 100th game and to dominate like that. It does mean we have to continue to work very hard now this week because with a team like that they are going to come back harder.

“There may have been an ice bath with a beer or two in. But really, it’s very much that we appreciate the win but also appreciate that was game one of four.”

Dow put in a fine performance at the weekend, scoring a try and defending well, though it was New Zealand winger Ayesha Leti-I'iga who dominated metres made for her side.

“Yes I think I referred to her afterwards as a pocket rocket. Our job this week is to try and make her a bit more redundant. Now that we have that game under our belt, we are able to do a bit more in terms of analysis and we’ve got to try and nullify the key threats and strengths that they have.

“I’d say that we are also starting this week fresh. We earned that result, but we didn’t earn anything else and we are preparing in that way. We expect their physicality to go up a level and their set piece to improve. Obviously, we managed to win a lot of front-foot ball early on from that and we know they’ll be looking to make improvement there.”

Dow and I spoke just a few hours after the announcement of the first contracts for the Welsh women’s programme and she is well placed to comment on the benefits that being a contracted player brings – though England remain the only squad with fulltime deals.

“It’s a joy to play for England and to have this time to do it is a privilege. I find it empowering to be able to be able to answer the question – what's your career,  with rugby player.

“There are obvious benefits but there’s more to it than the obvious. A former coach of ours did a PHD on how we managed with transitioning to fulltime and what changed, and I read his work on it.  A lot of what it showed was about the benefits of specialisation. So, the backs are able to get quicker and stronger than previously and interestingly a lot of us put on weight. It was something like a 6.5% increase in weight on average which was a similar trend in the men’s game when they turned professional so that’s down to having more time to focus on getting stronger and meeting what the game requires.

Dow, more likely perhaps than others to spend her free time reading academic texts  is a genuine advocate for having to focus only on her sport.

“There’s a lot of science behind what professionalism is able to do to a team. As a player and how it feels – for me personally it’s taken away stresses and added focusing time, so you don’t have that balancing act. You are switched onto every session, you’re not tired, you’re well fed. When you come home you can take that extra time for example to cook a meal properly instead of saying oh let’s chuck a white sauce in, it’s small stuff like that that over years builds a naturally healthy diet which helps your body to change and be better than other people.”

With her prolific try-scoring record and all-round game, Dow is now surely one of the first names on the England team-sheet, though she insists it’s not the case.

“No spot is nailed down. The talent coming through the league is outstanding. Myself, Lydia (Thompson) and Jess  (Breach) are the contracted wingers but there are great players coming in through the league. Look at Maud Muir for example - a non-contracted player who came in in and got her first cap at the weekend. That’s a competitive spot for contracted players too so it’s healthy there are no secure spots and it’s driving us. We have so much respect for all the other wingers in the league.”

Dow talks encouragingly about the culture within the teams she plays for – Wasps and England – which are especially important now with the team bubbling up for a month. So what does she bring to the table?

And what about her Twitter feed, dedicated almost entirely to puns?

“It’s healthy and it doesn’t hurt anyone so I can’t be told off! I like a pun and sometimes they just come to me, and I post them to see what the reaction is. People seem to like them.”