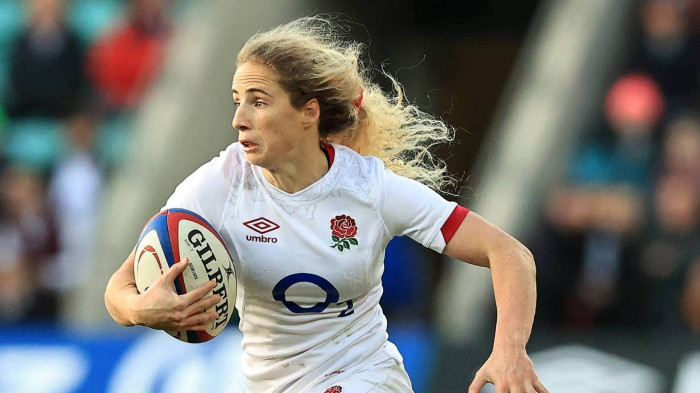 England wing Abby Dow scored a try in the 26-19 World Cup semi-final win against Canada at Eden Park on Saturday that the Guardian acclaimed as the best try at the fabled stadium since the ‘Try from the End of the World’ scored by Jean-Luc Sadourny of France in their 23-20 win over the All Blacks in 1994.

In the 50th minute, and only ahead 18-12, England were defending their own goal line grimly when Canada conceded a turnover. Dow recalls what happened next.

“One thing we’ve tried to do as a backline is play what we can see. As soon as we got the turnover it went straight to Zoey (Harrison) and then Claudia MacDonald (MacDonald). Why not take the opposition on because we can do more than kick?

“Claudia did some great footwork and then I was able to make eye contact with her. We played for the same club where she was a halfback. We’d practise her giving me these lovely, arching balls while running. She was able to give me a great pass and once I got the ball it was one of those one’s where you’ve got to back yourself.

“I knew Ellie Kildunne was on my outside. I was running as hard as I could, and she was only jogging. I knew Paige Harris was coming for Canada, she’s quick but that’s when you’ve got to put the fend out.

“I congratulated Claudie afterwards because that pass is a hard skill to do. Her other option was to kick but sometimes in the moment you have a flashback to what you do on the training pitch, and we like to train the way we play.”

What about those persistent complaints that England is boring?

“As a winger I can sympathise with people who think mauling is boring,” Dow laughed.

“There are lots of ways to play. Tactics are so vital especially when the stakes are higher, so you need to use the weapons that best suit you.”

Dow was born and raised in Maidenhead, a market town in the Royal Borough of Windsor and Maidenhead in the county of Berkshire. Abby’s father Paul was her first rugby coach at the age of five.

Her mechanical engineering studies at Imperial College London have been slowed by her progress in rugby. A lethal finisher for Wasps she made her England debut three months after the Red Roses 41-32 defeat to the Black Ferns in the 2017 World Cup final. She scored two tries in a 49-12 win against Canada at Twickenham Stoop on November 11. A week later she scored three times at Twickenham as England overpowered the same opposition 69-19 in a curtain raiser to an England versus Wallabies test.

Heading into the World Cup final against the Black Ferns tonight, Dow has never lost in 29 Tests and has scored 27 tries.

Apart from Saturday’s Canada stunner, what are her other favourite test tries?

“That’s a good question. The Black Ferns are a very different side from the one we faced last year. They had major issues getting games because of Covid but it was lovely to score a try in Test wins against them. It was a great achievement at the time,” Dow said.

“France always brings out the best in England. In 2020 I scored the only try in our 19-13 win in Pau which was satisfying.”

England have beaten France in their last 11 Tests but historically struggle against the Black Ferns conceding an 11-18 disadvantage in the head to head count. The hosts are 10-0 at Eden Park, their free-wheeling style the antithesis of the Red Roses methodical approach. This time last year the Black Ferns were rabble. In 2022 they have won 11 consecutive Tests. Can England beat New Zealand in a World Cup final for the first time?

“With success comes scrutiny and the inevitable pressure that brings with it. This squad has stood up to all of that and more and that is testimony to their ability, resilience, and unwavering belief in each other. When things get tough, this team knows how to get going, that is why we are relishing Saturday and all that it will bring,” he said.

“There can be no bigger challenge in sport than to play the world champions in their own backyard in front of a sell-out crowd - 99.9% of which will be forming part of the opposition.

“Great teams don’t fear those challenges, they embrace them, and meet them head on, that’s what we intend to do.”

Back to Dow’s Canada try. Where does it rate in England history? Was it as good as Prince Obolensky against the All Blacks at Twickenham in 1936 or Chris Ashton against Australia in 2010.

Danielle Waterman scored a try against Canada in November 2016 that was voted Red Roses try of the decade. It happened at Twickenham when Waterman dramatically dashed 80-metres clear in a 39-6 victory.

In 2011 Maggie Alphonsi finished off a fine team move to score against Scotland – also at Twickenham.  Emily Scarratt scored a try in the 74th minute of the 2014 World Cup final against Canada to seal victory.

England have only beaten the Black Ferns twice in New Zealand. The first occasion was in 2001, the try by Dow against Canada eerily similar to that scored by Emily Feltham to sink the Farah Palmer led Kiwis. The Gazette & Herald reported:

“A daring 60-yard sprint ended with the 23-year-old Salisbury schoolteacher touching down under the posts to secure a 22-17 victory and silence a crowd of more than 40,000 at Albany (Auckland), with millions more watching the match live on TV.”

Feltham recalled at the time.

"I can remember looking up at the clock and although I could see there were only two minutes left, I was still confident we could do it.

"I actually felt very calm and very confident even though they were right up on our own 22. The ball suddenly came out of a ruck via Teresa O'Reilly who just popped it off to our scrum half Jo Yapp. She drew four players, then passed to Assunta De Baise who passed to me.

"I saw a New Zealand defender coming at me and I thought I was going into touch, but I found a bit of speed and went for it. She missed me and by the time I've looked back there's no-one near me, so I went under the posts.

"I touched the ball down and just went mad. It was an unbelievable feeling. I asked the referee how long was left and was told three minutes. I thought he'd never blow the whistle.

"Then it was just amazing. Everybody went mad. There were tears and screams. It was just fantastic. A moment I'll never forget.”