The Netherland eventually emerged as comfortable winners in their European Championship semi-final against Germany, but only after coming back from a surprise half-time German lead. 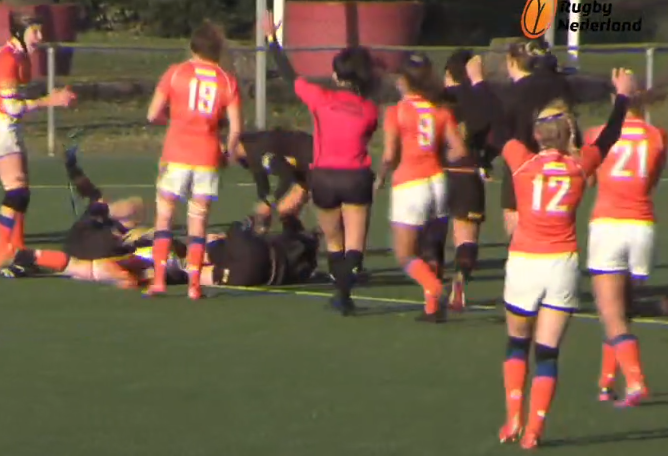 With 16 wins in 17 previous games, Netherlands - last year’s European runners-up – were clear favourites for their home semi-final against Germany on Saturday, but for the first 40 minutes at least the game did not go entirely to plan.

The Dutch had much of the early possession, and opened the scoring on 16 minutes with a gift of a try for Jordan Heil, after the Germans mentally turned off having given away a 5m penalty, Heil took a quick tap and ran through a defence that partly had their backs turned.

Five minutes later a superbly weighted kick through by former sevens star Lorrain Laros doubled the score, full back Willemijn Ter Avest just winning a race to the ball ahead of teammate Kika Mulling with the German defence lagging well behind.

But the Germans – with a stiff breeze behind them – worked their way back into the match. Keeping the ball with the forwards they ran through the phases, with tall second row Nora Baltruweit ending a series of pick and goes to crash through to score for Germany on 30 minutes – the first German try against the Dutch since 2008.

Then, right at the end of the half, having survived ten minutes of continual pressure German wing Gesine Adler flew through a gap in the Dutch line to take the Germans back into the Dutch 22. A 5m penalty quickly passed left found prop Friederike Loehr with the line wide open in front of her. With the try converted, Germany went into the break 12-10 ahead.

The second half was a little different, because – with likely the help of serious words from coach Gareth Gilbert - the Dutch took their chances and gave the Germans little or no chance to come back. Linde Van Der Velden’s try four minutes into the half put the Dutch back into the lead, shortly followed by scores from Annemieke Van Vliet (50m), Bodil Van Wijnbergen (54m & 58m), and Lorraine Laros (64m), taking the game out of sight for Germany.

The Germans did not stop battling, and on 67 minutes gained some reward with a try from captain Lisa Bohrmann, but it was the Dutch who had the last word with fullback Willemijn Ter Avest breaking down the wing to score just before the end.

The European Championship final between Spain and the Netherlands is expected to be at the end of March.