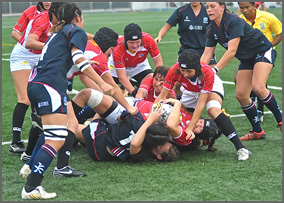 The East Asian Games next weekend will offer an opportunity for the 7s sides from China, Japan, Guam and Hong Kong to develop in another international tournament.

China may well be favourites having been the Bowl winners at the Rugby World Cup Sevens this year but they will face tough competition from their other three Asian nations.

The Hong Kong Womens squad (pictured in action) features several players from the recent fifteen-aside Womens Rugby World Cup Qualifier in Singapore including Royce Chan Leong Sze who captained the team in Singapore. Other experienced players include Hoty Chan and Samantha Scott. Man Po Kei from Gai Wu is also figuring in the final squad after recorded the lions share of the teams points in Singapore.

We have been training together since June and are very excited and looking forward to the Tournament. All of our team members are working very hard to fight for victory for Hong Kong. Our build-up has been good and currently we are focusing on how to apply different match strategies against our various opponents. China and Japan are our two main rivals in Asia and we are hoping to beat Japan and at least get a silver medal.

Among the standout players for Coach Yong is Royce Chan who captained the team at the Womens Rugby World Cup Qualifiers. Royce is hard working and determined and has great defensive skills. Shes a natural leader and always sets a good example for her teammates. Another up and comer is Kim Lau: Shes young and is only in her second year in the squad. She has speed and good defence. Kim has shown a lot of progress and has set herself a high standard to do better.