Edwards: Wales ready to move up a level

Wales women's rugby prop Catrin Edwards was one of the stand out players last weekend in the opening round game against England. Catching the eye with some excellent carried and sound scrummaging, she is relishing the chance to get back on the park this weekend against Scotland. She answers our questions. 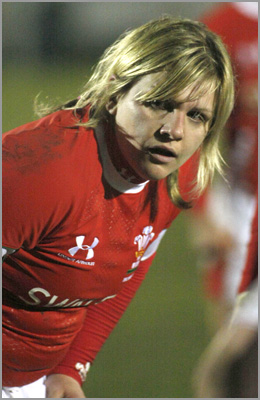 Despite losing against England, what positives can you take out of that game?

We were disappointed with the result, although we taking anything for granted after last years win. Although England were the better side, as a pack we were pleased with performance of our scrum. Considering the pace of their backs, there were times during the match where our defence was excellent.

You were maked out as one of the players of the match, were you happy with your performance?

One of my main aims for the match was to be a prominant ball carrier, and I am happy with that aspect of my game, as well as my scrummaging. However, I still believe that other aspects of my game need improving.

What areas are Wales looking to improve on?

It's clear after analysing the match that our contact area needs improving. We also need to improve on our decision making in certain areas of the pitch, and attempt to play more in their half.

Did England impress you?

England are on a high after beating New Zealand, and this confidence was reflected in the way they played on the day. This is the first time I've played against them in five years, and I was impressed with the pace and skill level of their backs.

Wales had very few games in the buildup the competition with the cancellation of the Nomads match at the last minute - did this affect you on the opening weekend?

Beating Sweden by 50 points gave us confidence and a chance to play some new caps. Although it was better to have a match than nothing at all, maybe next year it would be of more benefit to us to play some of the top teams in the world. This would then enable us to better assess our progress and where we are in comparison to the rest of the nations.

Scotland produced the surprise result of the weekend. Has this changed your preparation in anyway?

It's important not to go into any game complacent, and the result of the weekend proves this. Although it hasn't changed our preperation as we always knew it was going to be a hard game, it is vital that we produce a winning performance on the day.

What is your own personal goal for the game against Scotland, and what is the collective team goal?

My personal goal is to, in the 79th minute, chip over the Scottish backs, run around and catch it, side step the full back, and score a try under the posts! I need to fine-tune my chip and chase before the big moment arises against New Zealand in the summer. Just kidding!!

The collective team goal is to improve on last week and come away with the win.

You have recently come back to rugby having taken some time out. Why did you leave and what made you decide to come back?

The reason I left is because I wasn't enjoying it anymore and didn't feel like I could fully commit to the training. But after settling into my new job and having a few years of playing hockey, I realised that I missed the competitive aspect of playing at international level. I am enjoying it now.