Eight sides still have a chance of winning the last spot at the Rio Olympics after the first day of the World Rugby Global Repechage in Dublin. 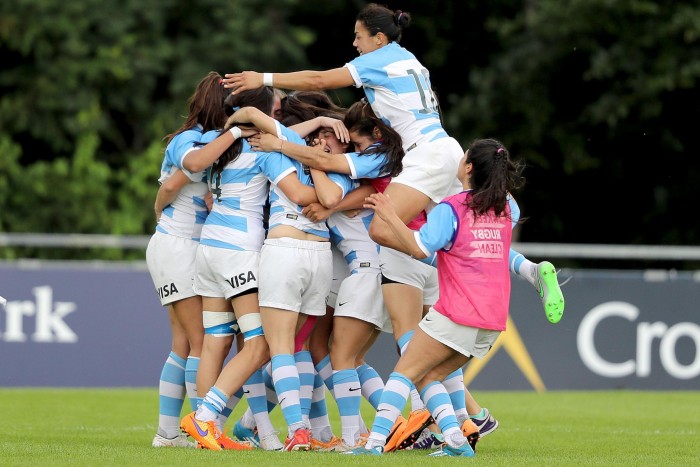 If the skills at times couldn't quite match the standard we have become used to seeing on the World Series, the passion certainly did and there was plenty for the crowds to cheer from even from the lower ranked sides.

From the plucky Madagascan side - whose two tries against Samoa brought great delight - to the experienced poise of Kazakhstan, Spain, Russia and Ireland who all went unbeaten, it was a positive first day at the venue of next year’s Women’s Rugby World Cup.

Of the unbeaten sides Spain and Russia conceded no points at all in pool play; superb efforts but perhaps both sides would have preferred tougher tests.  Marina Petrova and Daria Lushina were in outstanding form for Russia while for Spain there were the usual fine showings from Patricia Garcia, Marina Bravo and numerous others who regularly impress on the World Series.

Those three sides look the best placed for tomorrow’s Quarters, though Russia and Ireland are seeded to meet in the semis.

The results mean that the Cup Quarter Finals look like this

Here's our full rundown of the day.

First up Argentina v Kazakhstan where Kundzay Baktybayeva and Veronika Stepanyuga were real threats with their pace and power for the Kazakhs who were confortable winners 26-5.

The Cook Islands and Hong Kong promised to be tight and it was with little between the teams. Wairakau Greig looked a real threat for the Cook Islands throughout but it ended 12-12.

Mexico v Venezuela brought about another draw 5-5 and then we had Spain up in the first of the more experienced World Series sides. They are simply too strong for Tunisia with the Garcias - Berta and Patricia - impressing alongside captain Marina Bravo. The 38-0 win was well won.

Samoa showed expected power in their first outing with Zimbabwe with good showings from Brenda Collins, the captain and Sieni Mose, a strong finisher. It ended in a rout 57-7 to Samoa who looked a real that.

Russia made no mistakes either against Madagascar with Kazakova and Petrova going well while Dario Bobkiva scored the best try of the day with a mazy finish. It was a 58-0 win in the end - a huge scoreline to start the day for the favourites.

China showed up well in their match against Portugal, though the Portuguese made them scrap very hard for the 24-5 win, in which captain Chen Keyi looked in very good form.

Hosts Ireland drew a big crowds for their first match against Trinidad & Tobago and they didn't disappoint with a huge 51-0 win - with Alison Miller in particular looking lethal out wide with four early tries.

Argentina needed to ope with a win against the Cook Islands - who themselves had drawn in the first match, and the South Americans were much improved from the opening round with some great scores to win 17-12 in a great result.

Hong Kong too needed a win but Kazakhstan were extremely physical and despite some skilful play - they were outclassed with the Kazakhs winning 12-21.

Samoa v Madagascar was a fine match - with Samoa racing into a lead before the plucky Madagascans grabbed two back to finish 22-10 with a great finish from Dinah Ravelaorinora.

Russia were never going to have a problem with Zimbabwe and an early brace from Lushina set them on their way to another massive win - this time 59-0.

China, with two early tries for Zhou Rong, dispatched  of Trinidad and Tobago, who did get one back from Orella George, by 34-5.

Kazakhstan’s hard fought win over the Cook Islands meant they were the first team to qualify for the Quarter Finals and the next game in this pool was easily its most dramatic.  Hong Kong led 15-10 going into the final seconds with a place in the Quarters surely secured  thanks to some superb play from Aggie Poon but Argentina figured otherwise and a brilliant breakaway try followed by a brilliant conversion from Alcaraz saw them grab a 17-15 win. The celebrations brought heart ache for Hong Kong, whose Olympic chances fizzled out.

Argentina were overjoyed to win and their celebrations showed just how much the Olympics means. Tunisia qualified too, having started well but finished poorly against Venezuela but they did just enough to win 17-10.

Spain had had it easy in the pool so far, and it was no different against Mexico where they ran out 38-0 winners to ease into the quarters before Madagascar grabbed their first win of the tournament, beating African rivals Zimbabwe in an end to end game.

Ireland had to withstand a strong start from China but the hosts scored first in a vital final pool game through the impressive Crowe, and they were on their way to a fine 12-0 win under some pressure.