Elder ready to lead NZ into a new era

We caught up with New Zealand women's rugby captain Les Elder following confirmation of her appointment last week and ahead of this summer's Super Series. 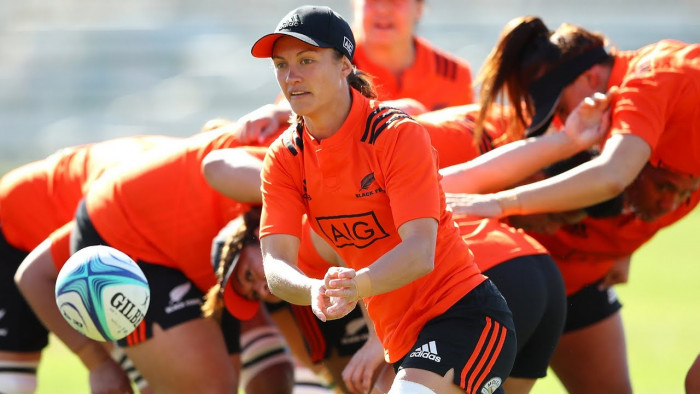 She vividly recalls the visit of Black Ferns, Anna Richards, Tammy Wilson, Hannah Myers and Dianne Kahura, to her school as a teenager and the enormous impression it made on her.

“I can still remember being blown away by their skill and physique. They were very fit and very strong and they passed, caught and kicked the ball in a way I had never seen women do.

“A year later I was playing for Waikato when I was 17 against Auckland B and I got to watch Anna playing for Auckland. She was just fantastic to watch - the way she commanded the game and took control, it was inspiring. As a young player it definitely focused your mind in trying to reach the top of your game.”

As New Zealand captain, Elder has replaced another legend of the game and following in the footsteps of the great Fiao'o Faamausili was never going to be easy and the flanker admits she took some time to consider the role.

“Yes I took some time to think about it properly. I wanted to be sure that I was the right person for the team and that it was the right thing for me to do - was I what the team needed, could I do what was required and so on?

“I think what is important for me is that I don’t plan on changing too much about myself. I must make sure I work hard and become the best seven I can be and if I can do that that will help me to lead with my actions. Then after that it is about working very hard within our leadership group to support the team in every other way.”

Elder is testament too to the power of never giving up.

Having played rugby at a high level as a teen, the collapse of the Waikato women’s side saw her switch to netball and move away from rugby altogether until a move to Australia in 2009 saw her take the game up again – this time in Queensland colours.

Returning to New Zealand in 2013, her Black Fern dream was back on.

“The idea of pulling on the shirt for the Black Ferns had always been on my mind – it’s every players’ dream, but with the way things had gone, me being away and the way the game was growing I thought perhaps the moment was gone though you never rule it out.”

“When I came back, the game had progressed a lot, there were more and more teams and lots more competition. I was playing club rugby in Auckland and NPC with Waikato and then in 2015 I had the trial that I really wanted with the Black Ferns.”

Elder didn’t make the cut for that summer tour but was called up through injury  - at 28 years old her Black Ferns dream finally coming through.

When injury struck via a badly broken leg in 2016, it seemed her hopes would be dashed again but her determination and fight to come back impressed everyone and she made the 2017 World Cup squad just in time.

“The injury was challenging and it was a long road to recovery,” she recalls

“My first game back was another Black Ferns trial game and I threw everything into that 40 minutes and I was picked to go to the World Cup. The competition was fierce but it was a privilege to be there. We learned a lot about where the game was going. Clearly everyone is getting better and the challenge for us now is to keep ahead of that. We want to play at a fast pace, we want to be fit and strong and we’re working really hard to develop the depth.”

Elder’s leadership skills and her tough, tenacious work ethic convinced Glenn Moore that she was the right pick as captain amid a period of transition for the Black Ferns, who have named ten new caps ahead of the Super Series this summer where they will face, Canada, France and England.

She is excited both about the chance to add to her 13 caps, and to lead the team out.

“The new girls are very exciting. They can all run hard, tackle well and they are big and strong so they just need to go out and play the way that got them picked and enjoy it.

“We’ve got some great experience at the same time and having players like Kelly Brazier involved is significant for us. She is world class at both forms of the game and she will add real direction and experience to the backs and the team. Having some of the 7s girls involved just keeps everyone on their toes and it’s great to have them in for this series.”

As a development manager for Bay of Plenty, Elder is kept busy by a demanding schedule, even though she is one of New Zealand’s contracted players.

“It is demanding working full-time and training but the way I look at it is it’s temporary and the support is much better than it has been. I am not going to be in this jersey forever so you just do what you can do to make the best of that time and work very hard at it.

So what of her leadership skills and what is she looking forward to most?

“In the short term I want to look back at 2019 and see that some of the things we wanted to bring in as a leadership group have become an important part of who we are and I want to work hard to develop the young leaders in our group. The World Cup is two years away and we want to make sure we are bringing that talent through and giving them a voice so that we have a legacy of leaders who can step up when the time comes.”

As for the future of women’s rugby in New Zealand, Elder is positive.

“The interest has grown so much. Netball is probably still the dominant female sport here but I think 7s and the Olympics has really helped to change the profile of women’s rugby. The Black Ferns have always been successful but now you’ve got a career opportunity in 7s it has taken that up a level.