England and France ring the changes

After bonus point wins on the opening day, England and France make wholesale changes to their teams for the tomorrow's second round. 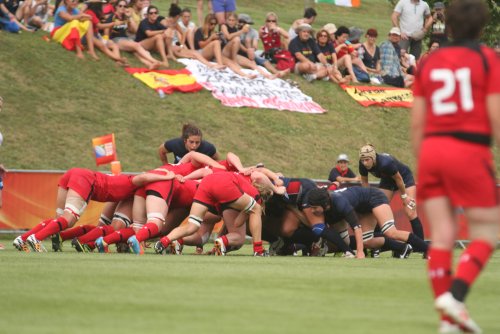 England make twleve changes to their starting XV, one positional, with Sarah Hunter taking over the captaincy from Katy McLean, who is given a complete rest in advance of the crucial game against Canada on Saturday. La Toya Mason also comes in as vice-captain and scrumhalf, while Amber Reed and Claire Allen combine in the centre.

“Because of the schedule of the World Cup it's key that we rotate our players", said Gary Street. "Having a game every four days is hugely physically and mentally demanding so our strategy is to rotate the squad and keep the players fresh.

“Rotating the squad means Sarah Hunter is captain for this game and she brings a wealth of knowledge to the role. This is a very different looking team to the squad that defeated Samoa but there are still 575 caps shared between our starting XVs so this is by no means an inexperienced team. We have got the depth so we are going to use it.

“It is exciting to bring back Alex Matthews who has been out for a while with injury. She has been outstanding in our training camps over the last couple of months. Alex is a dynamic ball carrier and gives us another huge physical presence in the backrow.”

Spain, on the other hand, make only a handful of changes - with the most interesting being positional, in particular the movement of Patricia Garcia to scrumhalf (a role she took on in the second half against Canada) with sevens colleague Marina Bravo moving to 10, The firey Barbra Pla moves from nine to the more familiar outside centre. Vanessa Rial moves from 10 to the right wing, with Berta Garcia starting on the bench. In many respects this is a much less experimenal line up than for the Canadian game. It's just about the most experienced Spain could pick and - if they can get the ball to their backs - potentially a very exciting one.

France make a smilar number of changes, with the captaincy also being handed over - though it remains with the number two shirt, Laetitia Salles - the most capped played in the squad - gets a chance to close in on the overall record by starting with the armband instead of Gaelle Mignot.

Overall, only two of the pack from the Wales game start, though, in terms of overall experience, there is little to chose between this pack and the one that started against Wales. In the backs Troncy (9), Grassineau (11) and Mayans (12) start again - a slight surprise as certainly Troncy and Mayans would be first picks, and might have been expected to be rested before the crucial game with Australia. On the other hand Guilglion (14) and Tremoulere (15) come in having missed the opening game, while Poulblan and Le Duff are in the starting XV this time.

Overall it is a squad that has a very similar balance to the opening game and it is clear that Gallonier is keeping all his options open at this stage. He may have a preferred XV, but there is no sign yet what it is.

South Africa make just five changes - with one enforced with the suspension of captain Mandissa Williams - a decsion the Springboks are appealing (judgement will be annonced on Monday, so she will miss all both of the remaining pool games regardless of its outcome.

Three of the changes are in the pack with prop Portia Jonga and No8 Shona-Leah Weston earning starts while flank Lamla Momoti has recovered from the knee injury that forced her to withdraw from the team against Australia last Friday. They replace prop Asithandile Ntoyanto, No8 Mandisa Williams and Rachelle Geldenhuys respectively.

In the backline fullback Siviwe Basweni replaces Cindy Cant and scrumhalf Fundiswa Plaatjie will start in place of Tayla Kinsey.

Ntoyanto, Geldenhuys, Cant and Kinsey, however, have all been named on the bench.

Flyhalf Zenay Jordaan will lead the team in the absence of Williams, while Momoti, who captained the team against the Nomads and France on the team’s World Cup warm-up tour, has been named the vice-captain.

“We have selected a team that we believe will be best suited to face France and we hope to see the team build on our solid second-half performance against Australia,” said Sephaka.

“Siviwe did well as a replacement last week and Fundiswa’s distribution was good when she took to the field. Portia, meanwhile, is a strong prop with impressive skills, so we believe she will add some grunt up front. It is also good to have a player of Momoti’s calibre and experience back, as this is her third World Cup and this experience will be invaluable against a team that comes off a good victory against Wales and who won the Six Nations with a grand slam.”

Sephaka was positive that despite the changes to the team, they would be able to maintain the momentum they built up against Australia.

“We have retained most of the key player combinations, so I don’t think this would disrupt our momentum,” said Sephaka. “We are also fortunate that in the positions where we have made changes, the combinations are settled as these players played together on the warm-up tour to London and France. Zenay and Fundiswa, for example, are also a settled combination as they are both members of the Springbok Women’s Sevens elite squad, so we believe all of these players will stand their ground.”

Commenting on the French test, Sephaka expected a physical battle and said they had to be at their best to create an upset against the hosts.

“France are a physical team with a powerful pack and quality backs,” said the coach. “They showed a lot of patience on attack against Wales last Friday and when we faced them in the warm-up game in July, and they tend to use their point-scoring chances well. They also proved against Wales that they have the ability to punish any mistakes the opposition makes, so we have to be wary of that.

“However, we produced a solid second half performance against them in our last match and we managed to do the same against Australia, so if we can build on that while tightening up our defence and converting our point-scoring chances into points, I believe we could challenge them.”