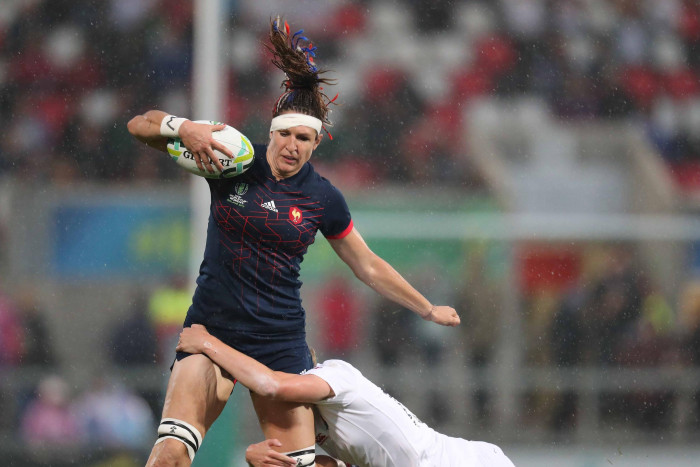 England reached the final, but it was a hell of a scrap to get there, with a thrilling game in poor conditions never failing to entertain.

In the end, England’s superb, well organised and patient defence paid off and France’s shambolic line-out cost them dear, as time and time again they wasted great territory by handing the ball straight back to willing white shirts.

France started the better, throwing everything at England in the opening 20 minutes.  With Safi N’Diaye and Elodie Poublan prominent, the French attack came hard and straight at England, with the Red Roses forced to defend deep in their own 22 for much of the period.

England’s rearguard was superb, staying patient in slippery conditions and with the France line-out desperately wobbly, England hung on to finally boot the ball clear and get into the French half.

An excellent strike from Emily Scarratt put England 3-0 up as the rain started to pour down, but in between some strong shows of defence from both sides; Shannon Izar returned the favour to level it up

The rain had a real impact as the half wore on, with handling errors abounding, and England lost Danielle Waterman to a head injury with Meg Jones replacing her.

There was nothing else to separate the sides at the break with the sides turning around level.

England looked more organised after the break in attack and although loose passes stymied their efforts, the ball carrying of Sarah Bern and Alex Matthews started to cause more and more problems for France and England looked odds on to add a try around the 50 minute mark.

But their passing let them down and they had to settle for a Scarratt penalty which handed them the lead.

Finally their efforts up front in particular did count ten minutes later, when Bern’s brilliant power running saw her barrel over the line to stretch the lead out to 13, thanks to Scarratt’s conversion.

It was desperate stuff for France as they tried everything to get back into the match - their best effort coming from a brilliant Jade le Pesq break but she was hauled into touch by Amber Reed and Annery, came agonisingly close minutes later only for her foot to hit touch.

In the end, England added the icing on the cake when Jones, who had a hugely positive impact off the bench, pounced on a loose pass to add another score at the death.

In the end it was comprehensive, but the USA gave their all in an excellent game full of running rugby and great tries.

Portia Woodman's four tries were the highlight as New Zealand had too much speed and accuracty for their opponents, scoring seven tries to two.

The result was even more impressive given New Zealand only led 15-7 lead at the break after an enthralling first 40 minutes.

The four-time world champions took a third-minute lead when fly-half Victoria Subritzky-Nafatali touched down, and after their opponents briefly led through an excellent Kris Thomas try  and a Kendra Cocksedge penalty edged New Zealand back in front before she converted Woodman's opener to secure a 15-7 interval advantage.

A second Woodman score and Cocksedge penalty opened up a 16-point gap, and then New Zealand underlined their quality during a blistering final quarter that saw them claim four tries in 15 minutes.

"It's taken a lot of hard work from the girls. We're so excited we're in the final," skipper Fiao'o Faamausili said after the win.

"Full credit to the USA team who battled all the way through to the 80th minute. A lot of respect for that team, they really gave it to us."

Faamausili said she was proud of the way the side responded when they were down to 14 players.

"The girls really had to dig deep and we've been training hard throughout the week, our preparation as been on point and I couldn't be prouder of how the girls dug today. We were down to 14 players and had to step in up another notch, so very very happy".