England return from their summer visit to North America with a trophy and a 3-0 record after a 27-17 win in the final game against Canada. 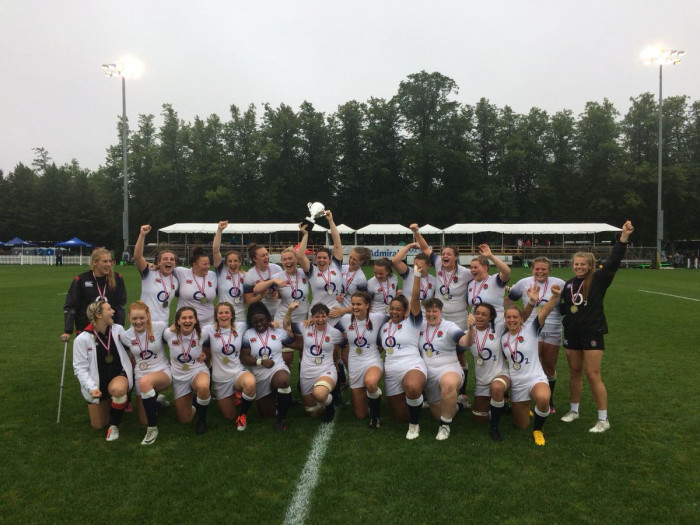 In rainy conditions in Halifax, England ran in four tries in an impressive performance to return unbeaten from the three-game tour. England had already overcome Canada and USA, taking home the title in Nova Scotia.

After Canada flanker Harley Tucker was sent to the sin bin, England's early pressure told and they got the opening score through a penalty try on 10 minutes when driving forward from a five metre scrum, it was brought down and the referee gave England the seven points.

The Canadians responded when a succession of pick and drives eventually told and No 8 Sophie De Goede was able to cross from a metre out. Lucy Attwood's penalty pushed England five points ahead and following a Canada spill from a high kick, the ball was worked to the right and prop Ellena Perry charged over from a few metres out for a 15-5 half-time lead.

England's third try came courtesy of a superb deep break from captain Phoebe Murray who worked her way through a number of defenders, bounced of tacklers before offloading to No 8 Sarah Beckett to slide over. Abby Dow's burst through the middle and pace from 25 metres out extended the lead, with replacement fly half Ellie Green adding the conversion.

Some neat handling by Canada saw Maddison Gold go over before Hannah Daniels dotted down with time dead to reduce the deficit, but the game was already won by England.

U20 Women Head Coach Jo Yapp said: “Conditions for this final game were challenging and I’m very proud of how the team performed under pressure. “As a group they have grown and developed over the course of the tour, and it is a great achievement to come away with the Tri-Nations Cup and return home unbeaten. I look forward to seeing how these players continue to develop back home with their clubs this season, with so many set to appear once again in the Tyrrells Premier 15s.”

On Tuesday, England secured a 43-17 win over USA in Wolfville with six tries, including two from Sarah Beckett. For the full match report and team list, click here.

They opened the tour with a 36-22 win over hosts Canada at Acadia University, Wolfville on Friday 10 August. First half scores courtesy of Lagi Tuima, Lilian Stoeger-Goddard, Abby Dow and Zoe Harrison, as well as six points from the fly-half's boot, handed England a 26-7 lead at the break.

Canada fought back hard in the second half, scoring a three tries and producing individual moments of brilliance, but were denied by further England scores from Harper and Dow.