England head coach Gary Street is already counting the days to the Women’s Rugby World Cup next year, and he says his team are confident that they are closing the gap on world champions, the New Zealand Black Ferns. 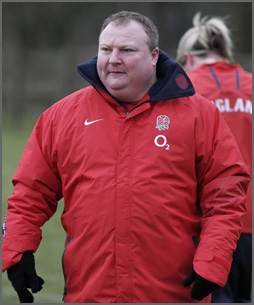 His side will play the Black Ferns twice in November and an England A game will also be played in between the two tests.

Street has a wealth of international coaching experience having coached Englands Students, Under 18s, Academy and Sevens in the past and last month he picked his squad of 44 to face the Black Ferns in the three tests later this month.

He believes the squad is now finely balanced and that they have the ability to beat a side who havent lost a game since 2001.

Yeah it is a really exciting squad, he said, speaking on the RFUs podcast.

We have got four new players in, two previously in the squad - one had a year off and the other a year in the army and it is great they have come back. The two others have come in new and one especially has come through our performance camps, right through from 15-years-old so its really promising how the system is working.

Blending the youthful talents of the new players along with some of the more experienced heads, he says is key.

Right at the far end of it weve got someone like Amy Garnett, this will be her third World Cup. and she brings such experience to the squad. She is in her early 30s now but has nearly 80 caps for England and then weve got a really exciting group of 18 and 19 year olds who were blooded last year the Emily Scarratt, Fran Matthews, Fiona Pocock generation and weve got another lot coming through so its very exciting for us at the moment.

The extended 44 player squad means that there will be opportunities for all players to play against New Zealand in either the full two test matches or the A game and Street says his players are under no illusion about the task ahead.

They (New Zealand) have won the last three World Cups and they havent lost a game since 2001 but we are really confident in the work that we have been doing though we have obviously been playing catch-up over the last few years .We think that the programmes we have put in and the reason I have come in to do this job is so that we can win the World Cup and we are going to face that challenge head on.

We have given lots of players the opportunity over the last two seasons to see where they are in World Cup selection, he added. But this year is about getting a settled side and we will use the 6 Nations for that and then we will build up towards the World Cup on the back of those really.

He is also hoping that the games draw plenty of support, especially the final test at Twickenham.

We are really hoping that if people havent seen womens rugby before that they sit down, get a beer and see two of the best womens sides in the world and I think people will be pleasantly surprised.

Looking further ahead to the World Cup, Street believes the competition is already at the forefront of the squads mind.

It might seem a way off but every moment I wake up in the morning it is the first thing that comes into my head so it is a daily thought for me already and were counting the days down and trying to make things right now so in ten months time we are ready to go.

If England can beat New Zealand even once this month then there will be no doubt in anyones mind that they will certainly be ready to challenge for World Cup honours.

Image thanks to: Pinnacle photos.