England were far too strong for Wales, winning 52-0 at the Twickenham Stoop. 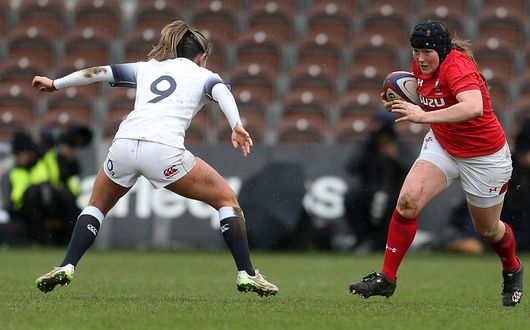 England looked to have learned their lesson from last week and came out firing, on the attack from the opening whistle and dominating the early exchanges.

Eventual player of the match Poppy Cleall got the scoring rolling when she drove over following some powerful work up front by an English pack that was dominating the tight exchanges.

Neat handling helped Abigail Dow score next before scrum half Leanne Riley sniped over and Ellie Kildunne's break through the middle saw Simon Middleton's side secure a bonus-point score inside half an hour and it stayed that way until the break as England led 26-0.

Flanker Marlie Packer dotted down from a powerful driving maul for England's fifth, before Katy Daly-Mclean's perfectly weighted grubber was pounced on by Rachael Burford.

Cleall's second was England's seventh try of the afternoon as they managed to continue their attacking momentum despite the worsening conditions towards the end of the game.

And 18 year old Kildunne finished the game with a moment of magic to score her second try of the mach.

“I couldn’t be happier with the outcome of the game, to score over 50 points was terrific," said England Women head coach Simon Middleton.

"I was pleased with the defence in particular, it is a focus area we want to ramp up, we talked about it during the week and today we were a lot more physical than we were against Italy.

“We set our stall out at the beginning of the tournament, we want to win the Six Nations and we want to do it with good performances. Our forwards were terrific today, not perfect, but they’ll know that and that’s what drives them. We have an unbelievably young back line in terms of age and in terms of experience and they’ll grow and learn from today.

"Overall I’m happy with where we are positioned at the moment and knowing also that we still have plenty to work on as a squad.”

Wales will be hugely disappointed in a performance where they rarely fired in attack and struggled defensively. Sioned Harries was a positive spark in the back row and Jessica Kavanagh-Williams made some hugely important tackles, but they will need to put this behind them, quickly.