England down Canada in London

In front of their biggest standalone crowd at the Twickenham Stoop, England beat Canada in an entertaining game. 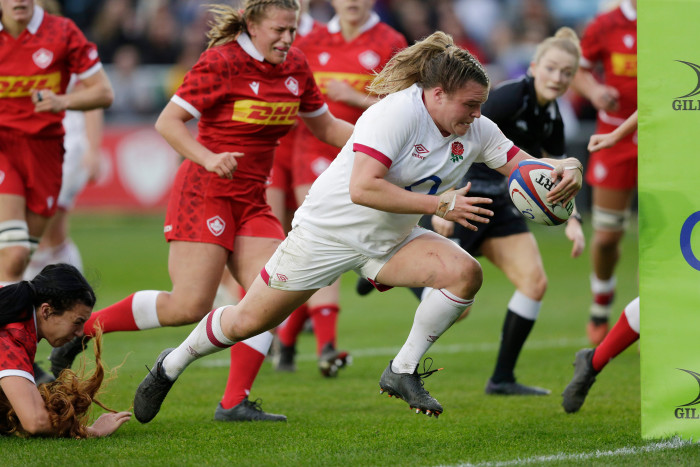 The 51-12 win means England are now unbeaten in 17 games, and though they were pushed hard by Canada for an hour, this was never in doubt.

England started strongly with their pack - including Poppy Cleall and Abbie Ward, both winning their 50th caps - carrying hard and they scored after just a few minutes when Zoe Harrison took a quick penalty which eventually found winger Heather Cowell who on her debut finished well in the corner.

Canada's pack fronted up well and their scrum was a match for England's as they dealt much better too than New Zealand had with England's driving maul.

They took the lead deservingly after 20 minutes when Paige Farries intercepted a pass to race over and Brianna Miller added the extras to make it 5-7.

But England started to come into the game through the carrying of the brilliant Sarah Bern and she bounced off two defenders to claim England's second try. Harrison followed up her conversion with a 30-metre penalty minutes later.

As half time approached a moment of magic saw Canada close the gap, thanks to a superb solo score from wing Sabrina Poulin, who hit an arcing run off an attacking scrum to fly over into the corner.

But Cowell, who was loving her first appearance, scored just before half time to give England a 20-12 lead at the break.

Two minutes into the second half Bern hit a line and broke through to score her second, and Harrison's extras extended the Red Roses lead to 15 points.

In what was their first match outside of North America since 2018, Canada continued to cause problems through their physicality and ambition to attack from anywhere.

But the England began to take control of the Test, and as the hour mark approached, Claudia MacDonald darted off the back of a rolling maul, splitting the Canadian midfield to dot down under the sticks, giving Harrison the easiest of conversions.

Another penalty from the boot of Harrison, her twelfth point of the match, kept the scoreboard ticking over, and an Alex Matthews try 10 minutes from the end, was followed by another MacDonald score - one converted by Rowland, the other by Harrison - made it 51-12 and secured the win.