England off to a fine start

England beat Scotland 57-5 in Edinburgh to kick off the much-anticipated TikTok Women’s Six Nations in front of a new Scottish record crowd of 3,988 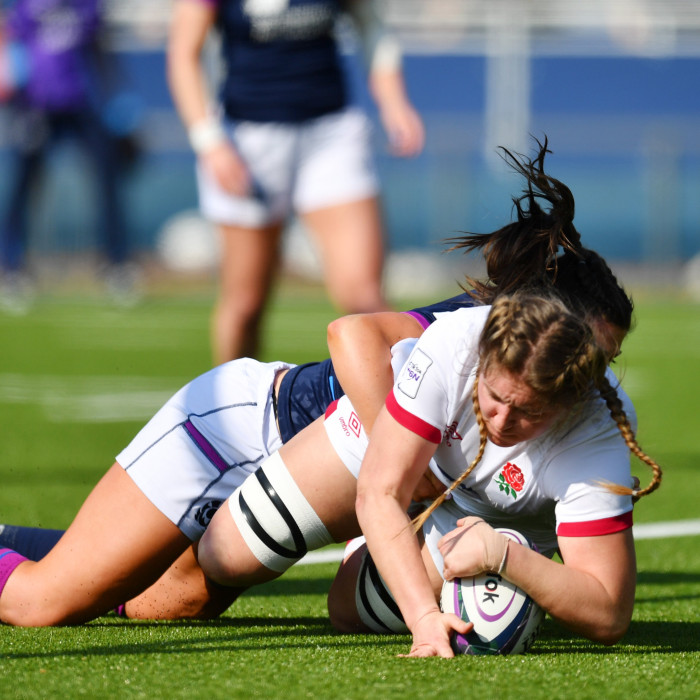 The Six Nations returned in Edinburgh, with its own fixture window and with its own sponsor, but a predictable opening result.

In truth Scotland played far better than the scoreboard suggested, especially in the second half when they had almost all of the possession and territory. However, it is also telling that despite that England won that half 19-0.

Scotland also began the first half impressively and could even have gone ahead but for Hannah Nelson’s penalty attempt just shaving the post after six minutes.

But much of the rest of the half was one-way, and in England’s favour. From the 10th minute England visited the Scotland half seven times and came away with six tries.

Marlie Packer got the first try in the 10th minute – the first of three for the official “player of the match”. Poppy Cleall doubled the lead four minutes later, Emily Scarratt adding the extras for both scores.

Chloe Rollie scored a well taken try for Scotland shortly after, but that was just a pause in progress of the England juggernaut as they kept the scoreboard moving at better than a point per minute. Heather Cowell added a third try after 22 minutes, and a brilliant break by Abby Dow set up by a clever pop pass from Scarratt secure the bonus point in the 26th minute. Packer scored her second and England’s fifth five minutes later, and Leanne Infante rounded off the half with a sixth to end the half.

Scotland had their moments but were running into a white wall. Between the fifth and sixth England tries, the Scots had a session of play where they went through over a dozen phases in between halfway and the England 10m line, and gained no territory at all, eventually losing possession in their own half, from which Infante finally scored her try.

The fear at half-time was that England might run away with the game as they had against the USA in the autumn, but that was not the case.

Scotland came out inspired by whatever had been said during the break. After 48 minutes they were desperately unlucky to not get a try, and England and Scots hand both seeming to push the ball towards the England line from a lineout on 5m, but the decision went England’s way. The resulting scrum was won by England, setting up a period of play that ended with another England try, this time from Holly Aitchison.

Scotland kept piling on the pressure, but to no avail, and when England again broke out in the 63rd minute they again scored, Connie Powell getting the ball down from am England maul seconds after coming onto the field. Marlie Packer added her hat-trick two minutes later.

Despite these reversals Scotland never gave up, ending down on the England 22 before England cleared into touch to end the game.