England on fire in Cardiff

England continued their great Six Nations form with an impressive 51-21 win over Wales. 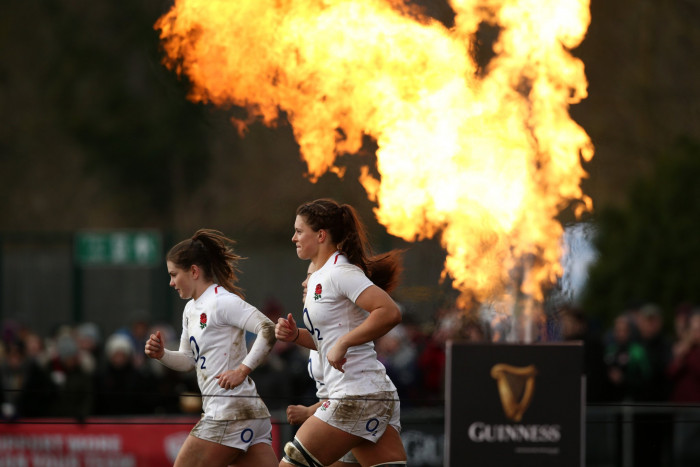 England were deserved winners in Cardiff, but Wales still have their moments in an entertaining lunchtime game in Cardiff.

England started at pace, and Wales found themselves two tries down almost immediately. It took England just 90 seconds to get on the board. After gaining possession of the ball, just eight phases saw Sarah Bern crash through the Welsh line. 0-7. Then on five minutes a dummy by Zoe Harrison broke the Welsh line. She was tackled short, but the ball was moved wide to a massive three or four player England overlap, and a try for Jess Breach. 0-12.

Wales recovered a little from the initial explosion, but any error was being punished by England and on the quarter hour a handling error and turnover gave Katie Daley McLean a chance to kick to the corner. From that a simple pick and drive, with Marie Packer at the centre, brought the third try. 0-17.

After 26 minutes a terrific break by Sarah Bern from 30m out, sidestepping Elinor Snowsill en route, gave her a second try and England’s bonus point. 0-24.

On the half hour Breach got her second try, breaking a tackle to score, finishing off an impressive team attacking move. 0-29.

But after 35 minutes Wales finally got inside the English 22 following a great break by Keira Bevan. The ball was worked wide to Jess Kavanagh whose footwork took her to the line – and the first Welsh try against England since 2016. 5-29, which was the score at half-time.

That score gave Wales some momentum at the start of the second half, where Wales had most of the possession for the first quarter-hour, but without being able to add to the score. But as soon as England regained possession, they were back on the Welsh line only for a hat-trick try for Bern was disallowed for a knock-on. Wales were unable to clear and on the hour Cath O’Donnell finally forced her way through for England’s first points in the half. 5-34.

Four minutes later the ball reached Abby Dow on the right wing who exploded forward, fending off three tackles in a 30-metre run to the line. 5-39.

Sarah Beckett followed on 69m, smashing through the Welsh line to score under the posts. 5-46.

But Wales were not finished. Impressive retention and 27 phases hammering on the English line finally brought reward and a try for Cerys Hale. 12-46.

The final word came from England, however, who were determined to pass 50 points for the third year running in the fixture, with Daley McLean finishing a team move. 12-51.