England off to a good start 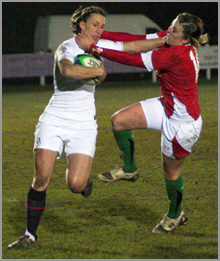 England got their 6 Nations campaign off to the perfect start with a comprehensive defeat of Wales.

The 31-0 win means that the champions go into next weekend's game against Italy full of confidence while Wales will be under pressure to deliver against a Scotland side on a high after their win over France.

Both sides showed their intent in the opening encounters. Englands straight hands put Kat Merchant into space on the wing while Wales showed similarly quick hands, giving the crowd a taste of what they might expect.

The home team though dominated the important exchanges and Englands first try came after only four minutes.

A quick counter attack saw England bring play into the Welsh half where Claire Purdys dancing feet made some good ground. From there impressive flanker Heather Fisher was on hand to crash over for her first ever try for England.

England continued to pile on the pressure with play camped high up the field but after turning down an easy penalty, they had a scrum turned over close to the line as the Wales pack worked hard to get their team back into it.

Wales began to have some success with crash balls; Catrin Edwards was proving particularly effective at crossing the gain line, however, England took the sting out of their advances when a hit from Maggie Alphonsi led to a turn over inside the Welsh 22 and the ball went wide with Emily Scarrett holding the last defender before releasing Kat Merchant who took the score to 10-0.

The visitors problems were compounded on 31 minutes when Catrina Nicholas was sin binned for lying over the ball. Perhaps some consolation could be had from the fact that, despite being the smaller pack and being a man down, the Welsh forwards won their second England scrum of the day, a positive that the visitors will certainly take into their next games.

Just before the break England scored again with some excellent backline play with first Fi Pocock breaking down one wing band then centre Emily Scarrett side-stepped her way through the middle of the Welsh defence to touch down. Katy Mclean converted the try to take England into half time 17-0 up.

Wales managed to create some momentum after the break. An early penalty attempt was missed by Non Evans, but more possession and better phase play gave them some early hope.

A characteristic Alphonsi smash soon put paid to that however, and the resulting turnover lead to an England counterattack that would take them up to the Welsh 22. Running moves with confidence Claire Allan took the ball from Mclean behind her centres and broke through the middle. From the ruck Alphonsi and Merchant combined, but the final pass to captain Catherine Spencer sailed into touch and the chance was lost.

England did surge ahead again though with more classy backline play with Pocock superbly offloading in a tackle to Emily Scarratt who released Mclean. The fly half scored and converted the try to take the home team 24 points ahead.

Englands fifth and final try came from prop Rochelle Clark returning from injury and Mclean converted with a sublime kick from the touchline taking the score to 31-0.

Gary Street made a raft of changes in the second half with Michaela Staniford and Alice Richardson in particular catching the eye when they came on.

England will overall be pleased to have lain to rest the defeat of last year at the hands of Wales. A sound lineout gave a good platform, but Street will be concerned about his side being turned over at the scrum. It was by no means a perfect game from the champions who will no doubt get more clinical as the competition goes on.

Wales will need to work on their lineouts as overthrows and England steals were far too common, but they demonstrated that they have pace and great hands and they will be a threat in their remaining games.